Yesterday I came home from work, expecting the usual quiet evening at home. Around 4:15pm, the hubs checked his email and found out that he had won two tickets to see Madagascar: Escape 2 Africa. For a 7pm show. In IMAX.

We made the decision quickly that we wanted to see the movie and were out of the door by 5pm. We fought the rush hour traffic all the way to Alexandria.

Aside from the IMAX shows I've seen before in science museums, I have never seen a real movie in IMAX. The hubs has taught me several times the picture quality difference between dvd and blu-ray, but to this day, I still think they all look the same. Well, even for someone like me, I was wow-ed by the picture quality of IMAX. So shape, so bright, so nice! 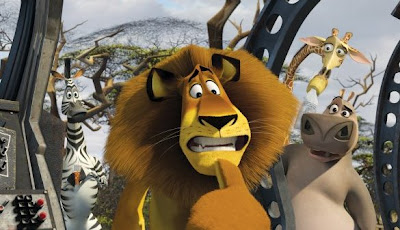 The first Madagascar movie was one of my favorite animated movies because it was original and outright hilarious. The penguins were a riot. ("Hey, higher mammal, can you read?")

Madagascar 2 was no different. There were so many good parts throughout the movie! The penguins were, as ever, brilliant, and they stole the limelight in every scene they appeared in. I found myself laughing out loud, along with the rest of the audience. I have to say my favorite character is Alex, though. I find his personalty enchanting! A dancing lion!

Madagascar 2 bears a resemblance to The Lion King, both in setting and characters, with the lost son, manipulative lion, and wacky sidekicks. The Lion King is one of my favorite Disney movies, so it's no surprise that I really like this movie, too.

This is a fun, upbeat movie. Highly recommend!

And this weekend, we are going to see Bolt!

As you can see, we may look like grown-ups, but really, we are just a bunch of 5 year olds at heart. =p

PS. Traffic wasn't too terrible. We actually arrived at the theater well before 6pm. So we sat around and took self-portraits, such as this one.
Email Post
Labels: entertainment