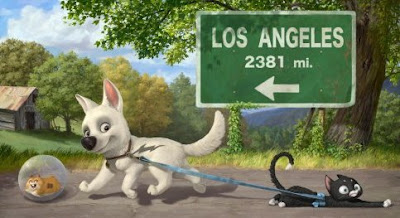 Remember last year when the hubs and I went to see Enchanted and had a field day at the concession stand? Well, this morning we met up with friends Su + Jeff and did it all over again! This time, we saw Disney's newest, Bolt.

Bolt is an animated film about a dog who has superpowers and saves his person's life on a day to day basis - or so he thinks. After being duped into thinking Penny was not okay at the end of a scene, Bolt makes a run for it to rescue his beloved person. He ends up in NYC and it's a long-winded journey back to Hollywood - along the way, he learns he doesn't have superpowers and how to be a real dog that chases and begs.

While the storyline is very similar to other Disney movies such as Homeward Bound and Toy Story 2, it was still entertaining, touching, and genuine. The themes surrounding friendship, family, and loyalty get me every single time. Definitely a must-see, especially if you have a pet!

The movie is filled with likable characters; I especially liked Mittens, the stray cat. Her story is realistic because I personally know people who abandoned their cats for various (invalid) reasons. It's sad because pets are like kids. I know kids get abandoned sometime, too, but people are much more inclined to do so with pets and I find that so wrong. I am glad it was an happy ending for Mittens, though. But hey, with Disney, I would be surprised if it wasn't.

Overall I enjoyed the movie a lot! I can't wait to watch it all over again once it comes out on blu-ray.

Now the snacks. We weren't nearly as greedy as last year. :) We got popcorn, junior mints (that Luke made sure to eat it right in the theater this time just to avoid being accidentally thrown away), chocolate-covered raisins, fruit snacks, cherry icee, water, and Dibs. It was my first time having ice cream in the movie theater! 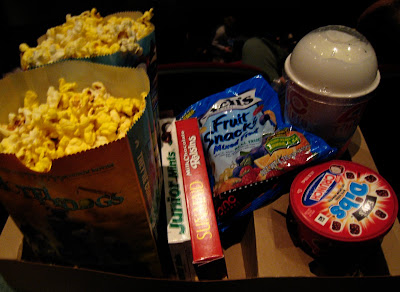 I had a great time! Thanks Su + Jeff for inviting us!