Last Tuesday, Veteran's Day, my mom and I found ourselves driving past Dupont Circle and making an unplanned stop at Hello Cupcake. I wanted to visit Hello Cupcake since it opened in late Aug 08. So glad I was able to check that off my list! 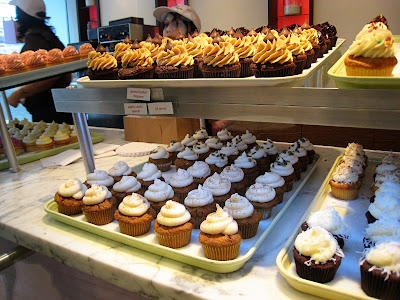 With charming little touches like indoor and outdoor seating, pink packaging, a flashy pink chandelier, and perfectly crafted cupcakes, Hello Cupcake is all about details. According to a recent series of articles by The Washington Post called Cupcake Wars, Hello Cupcake comes in second to Georgetown Cupcake. Having been to Georgetown Cupcakes before, I must say that as far as cupcakes, I love them both equally – I adore light, airy, pretty, not-too-sweet cupcakes.

Hello Cupcake, however, offers the customers a place to sit and enjoy their cupcakes whereas Georgetown Cupcake is a to-go place, as I mentioned it before. Having that space for the customers is a huge plus in my book. I even saw at guy with his computer at Hello Cupcake so I assume WiFi is available, too.

We ordered two cupcakes to share. Princess – a vanilla cake with pink strawberry buttercream frosting and a sprinkling of pink sugar and You Tart! - a lemon cake with lemon cream cheese frosting and yellow sugar on top. 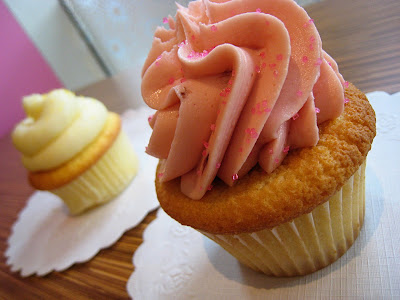 We sat on the stools by the window and enjoyed our cupcakes.

Both cupcakes were delish!

The cake bits were moist, light, and tasty. But what really blew me away was the intensely flavorful and rich-without-making-you-feel-ill frosting. The frosting didn’t overpower, which was unexpected, because the cupcakes came topped with a mound of frosting. Wowee. I thoroughly enjoyed them.

The cupcake is $3 each, tax already included. Yes, unbelievably expensive. Which is why treats such as these will come far and few in between. :) So DCers, if you like cupcakes and haven't done so, I highly recommend a trip to Hello Cupcake!