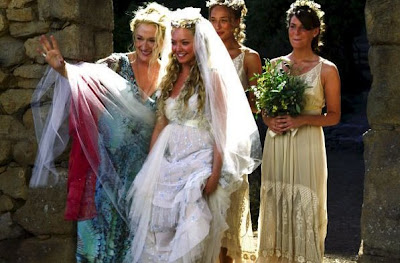 Mamma Mia was lighthearted, funny, and and a bit crazy. I watched it twice within 24 hours.

Prior to watching the movie, I only had a faintest idea on the story. So really, I didn't know what to expect at all. In fact, I wasn't even familiar with ABBA or their songs.

As soon as the first song, "Honey Honey", started, I was loving it! And not just with the music, but also the sparkling blue water and the rocky cliffs. The scenery was just beautifully amazing! The story was fun and had laughs for all ages. The dancing scenes were great and well put together.

The movie was filmed on the islands of Greece, which made me want to go more than ever.

I was also really surprised with Meryl Streep's awesome performance. The last time I saw her was in Devil Wears Prada, in which she played a very serious business woman who never smiled. It was fun seeing her climb on top a roof singing "Mamma Mia!" and swoon and the dance teenage giddy girl dance! :)

I am hooked on all the songs. For the past few days, I have been jamming to the tunes in my car. I sing along and my head instinctively bops up and down. It makes my drive to and from work much more enjoyable.

I have never seen the musical live, but now really want to! For those who have seen both, are they very similar?
Email Post
Labels: entertainment