Times are tough. To help pay the bills, I sold my Print Gocco.

Okay, not really. About the bills, that is.

I was a DIY bride all the way. After the wedding, I started developing withdrawal symptoms where I wanted to create something. My hands were restless, trembling, and I felt the sweat pouring. And around the same time, I was introduced to the wonderful world of Weddingbee and learned about this magical machine called Print Gocco. So I bought the freakin' machine, despite the astronomical cost of the unit itself and supplies. And despite that I didn't have any projects to work on.

I used the machine a total of four times.

The thing about Print Gocco is that it's for mass production. Every time you "flash" a design, it's best to print 100+ prints to get the biggest bang for your buck.

Unfortunately for me, I didn't need 100+ prints of thank you cards, hello cards, or personalized note cards. Plainly put, I didn't have projects that require mass production.

And honestly, I just wasn't that into it anymore. It had been sitting in storage, collecting dust.

But perhaps the biggest reason of all was this:

Eventually, Print Gocco will become obsolete when supplies are no longer available.

So I decided to sell it while it's still highly in demand. I listed on Craigslist and posted a link to it on Weddingbee. A bride-to-be in So Cal snatched it up on the same day.

Whew! I felt a sense of freedom.

I am glad I had the experience of playing with Print Gocco. I had fun making the new year cards (I will find a new way to continue that tradition next year). And I also have a set of my own note cards.

But ultimately, this machine is too expensive for just "playing". 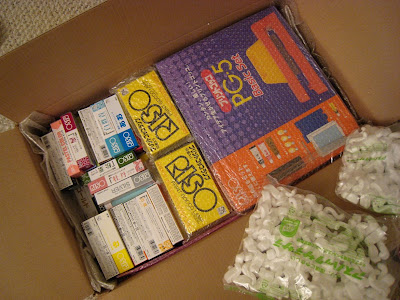 Goodbye Gocco! Hope you are put to better use by your new owner!
Email Post
Labels: DIY