Yesterday a black kitty cat followed me home. Since it was cold and wet outside, we decided to let him in. Pargo had himself a good time; growling and testing to see how close he could get to the cat. I was worried that the kitty might jump on Pargo and claw him, but the nice kitty just wanted to be left alone. In fact, he tried his darnest to get away from Pargo. At one point, he hid behind the TV and Pargo, blind as a bat, couldn't find him. Oy. 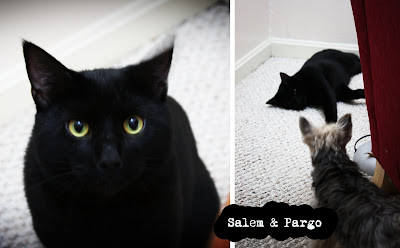 Noticed that the kitty (Salem) had a collar on him, I called the owner and left a vm. A little while later, the owner called me, after saying thank you, she told me that he was probably just looking for a dry place to stay, but he's actually an outdoor cat. In fact, they only live a couple of doors down from me. There I was, thought Salem was completely lost. Ha. When the sun came out, I let Salem back out.

The hubs and I both enjoyed having another animal in the house, even though Pargo was very territorial. It was a fun way to spice up an otherwise ordinarily day.
Email Post
Labels: love