Easier Than I Thought

After yesterday's post, I was sure that my "paper" anniversary present will have to wait until after next week. But it happened in a flash...there I was, packing, when BAM! The image of my "paper" present flashed before my eyes. I dropped whatever I was doing, opened Photoshop, and got to work creating a masterpiece. Within an hour, done!

OK, so it's not exactly a masterpiece, it's just a simple menu I whipped up while watching reruns of Grey's Anatomy. For fonts, I used Miss Brooks and Orator Std (an OpenType font in Adobe). I didn't have a design in mind - but I knew I wanted to keep things easy. I also didn't have the menu size in mind; I just sort of played with the typefaces, placements, and layout. And ultimately, I put together a design that I like! 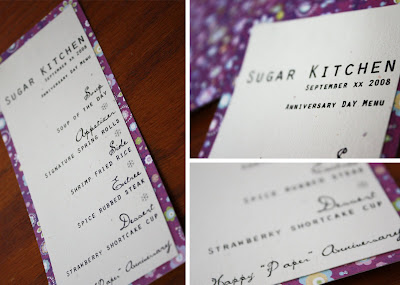 I saved the image in .jpg, opened a blank Word document, inserted the image into the document, and printed on 80lb recycled sand specks cardstock (which satisfied the paper requirement of this 1st year anniversary gift tradition). Because I don't have a color printer at home, I had to keep the text in plain black. To jazz it up, I cut a colorful thick scrapbook paper to size and glued the two pieces together. 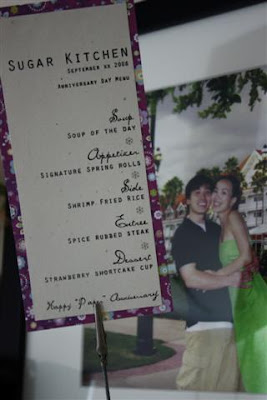 Now that the easy part is done, the time-consuming part will actually be the execution! I don't know exactly when this meal will happen, but per the menu, it will happen sometime in September. :) Luckily I set myself up for success; these dishes aren't complicated to make. In fact, it will just be a nice homey meal.
Email Post
Labels: DIY love