Yesterday, on a rainy and humid Saturday, my mom and I went to the 2008 National Book Festival in DC. The festival is an annual event celebrating reading. It was my first time there. It was also my last.

The festival featured more than 70 award-winning authors, illustrators and poets in areas such as Fiction & Mystery, History & Biography, Children, Homes & Family, etc. I was most interested in Homes & Family.

We arrived just in time to hear George Duran, host of Food Network's "Ham on the Street", speak. He gave an advice on food photography. He suggested that instead of take pictures of dishes that look perfect, take pictures of food that have been bitten into it (ie. a hamburger with a bite). I will try it next time. 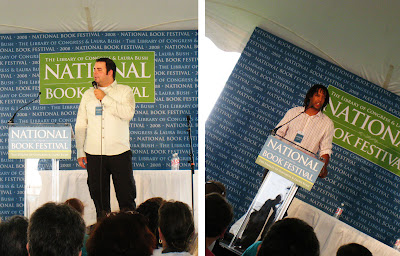 We also heard Warren Brown of Cakelove speak. One of his suggestions for baking good cakes is using a scale for precise measurements instead of measuring cups. He also suggested butter over oil, always. I guess that's why his cupcakes aren't the moistest.

Overall, the festival wasn't all that exciting. Not much to see, at least for me.

The festival was not a total loss, though. We received these tote bags. They will help me even more with my effort of "going green". Too bad they don't have a flat bottom. 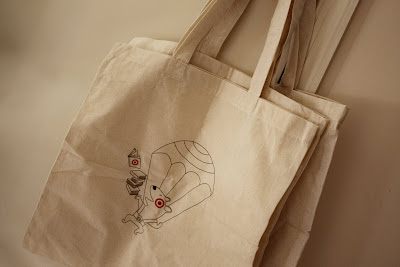 The best part of the trip was after the festival when we went to Maine Avenue Fish Market. We left empty handed, but got full from eating tasty samples. I had some fried shrimps, fried fish, and strawberry shortcake. I know, strawberry shortcake at a fish market? Was it sanitary? I thought the same thing, but ate it anyway. It was delicious. I ended up having 4 slices. Best part of the trip. Hands. Down.

*All photos taken by me and edited in Photoshop using PW Action Set 1.
Email Post
Labels: Around DC friends + family