We Have A Miracle! 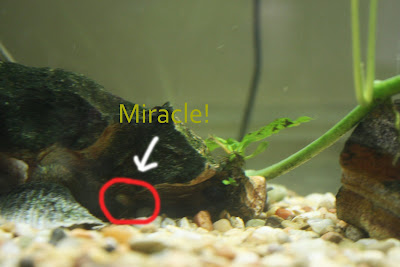 It's a happy day here at sugarlens. I was doing my usual morning fish feeding duty when I noticed two eyes staring at me from under a rock. Could it be??!!

We have a little cichlid baby!

If you recall, earlier this year, we adopted a little blue cichlid. Well, the little guy is all grown up now (more pictures later). Besides tC, we have two other grown cichlids, Easter and Bunny, in the tank. These two cichlids "play" with each other often and the female, Bunny, has gotten pregnant several times.

Whenever she gets pregnant, she puts the eggs/babies in her mouth and stops eating for weeks. She eventually releases the babies, but they never make it because they always get eaten by the other fishes in the tank.

So imagine my excitement when I saw the little cichlid today! A survivor! The picture above makes him look bigger, but really he's only the size of my pinky finger nail. He's very smart and hides under a rock. The other fishes don't know about his existence (but we think Bunny knows because she goes to the rock sometime).

It's truly a miracle and I appropriately named him just that, Miracle.

I hope he gets bigger and stays out of trouble in the meantime. Look for updates in the upcoming weeks!
Email Post
Labels: fish