Going to Disney World isn't about the rides anymore. For us, it's all about the food! And boy, did we stuff ourselves silly for 5 days straight. Luke gained at least 5 pounds. As for me, I am still afraid to step on the scale.

We tried a couple of new restaurants and snacks this year. I didn't take pictures of everything, but here is a sample of what we put in our tummies!

The pineapple float at Aloha Isle (Magic Kingdom) was such a refreshing treat. It is basically pineapple juice with pineapple dole whip soft serve on top. It took us back to Hawaii. We visited it twice during the trip. 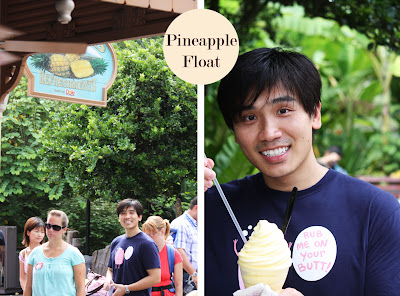 We waited in line forever for this raspberry lemonade slush at Enchanted Grove (Magic Kingdom). We sweated bullets while a group of Italians ordered espressos. Espressos on a hot summer day?! The slush cooled us off, but we probably won't get it again. It was just eh. 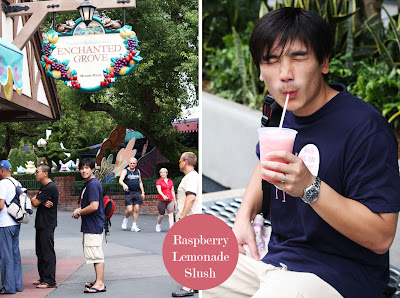 This root beer ice cream float from Plaza Ice Cream Parlor (Magic Kingdom) was just okay. In hindsight, we should've gotten a double scoop ice cream cone. We rarely (no, make that never) have soft drinks so I am not sure why we got this in the first place. Although, since I never had a root beer float before, it was certainly something different. :)

Mrs. Potts' Cupboard at the Magic Kingdom is one of our old favorites. The fudge brownie sundae we got was a big piece of brownie topped with chocolate soft serve, hot fudge, and whipped cream. We ate this near the end of the day and definitely didn't need it, but we had snack credits left to be used. 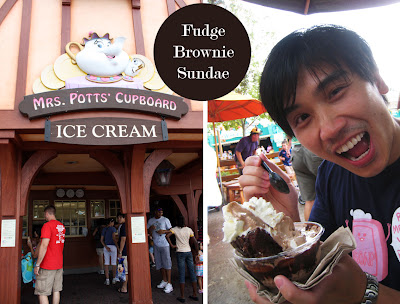 After all the sweet snacks, we decided to go for something salty at The Village Fry Shoppe (Magic Kingdom). We ate the McDonald's fries under the rain!

You may have noticed that all the pictures thus far in this post are of us wearing the same t-shirt. No, we did not wear the same shirt every day and yes, all theses pictures were taken on the same day (which was also our last day). The reason why we pigged out so much on the last day was because we still had 5 snack credits (more on that later*) left to use. Of course, we weren't about to let any of it go unused. So on that day, we ate our way through the Magic Kingdom. We only went on 3 rides total, and that was really to take naps.

This was our first time dining at LTT and we will be back!

The service at Teppan Edo (EPCOT/Japan) was top-notch. The food was great too! The shrimp sauce was delicious and a bit tangy. Luke and I both got the Asakusa entree (sirloin steak and shrimps with seasonal vegetables, Udon noodles, and steamed rice). It was lots of fun watching the chef cook in front of us. A wonderful (yet very long) meal! I guess it may be a reflection of how long a meal takes in Japan? 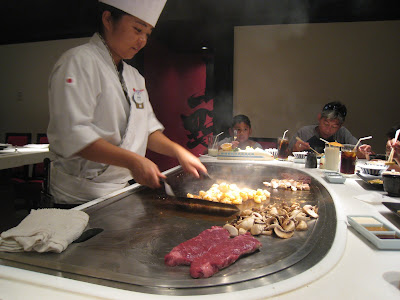 Yucky yucky yuck! I didn't like all-you-can-eat buffet at Biergarten (EPCOT/Germany) at all. Maybe it was because I was still full from the Japanese lunch, but everything tasted gross and sour. They had live entertainment during dinner, but I didn't find it interesting. It just made it hard to have conversation, especially when we were seated next to the band. Blah, Germany is on my X list. 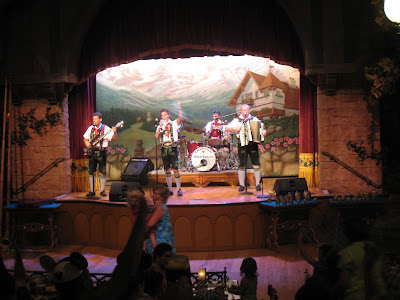 The meal we had at Tusker House (Animal Kingdom) ended up being Luke's favorite. The buffet featured carved meats, stews, and salads with an African twist. I especially liked the curry triangle thingies and pearl couscous. It was neat; I tried all sorts of different exotic foods, but things like bite-size corn dogs or rotisserie chicken were also available. I highly recommend this restaurant! 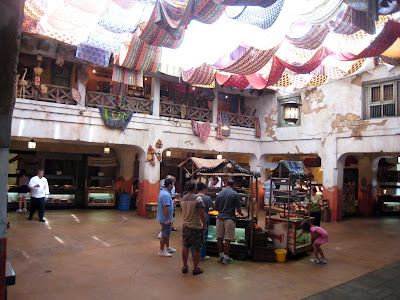 We ate at 50's Prime Time Cafe (Disney Hollywood Studios) last year and Luke loved the PBJ milkshake. This restaurant was the only place Luke requested to eat at, so we did. I ordered chicken pot pie and he got pot roast. Both were decent, a bit too salty. The best part of the meal was the drinks! Luke got his PBJ milkshake again and I got the stawberry smoothie. The smoothie was so light yet flavorful at the same time. I loved it!

We ate at a couple of counter service restaurants, but my favorite will always be Everything Pop Dining at Pop Century Resort. We didn't stay inside the parks as much as we did in the past, so this time, we actually ate at Pop three times! My favorite is the pan-seared fish of the day, which is always salmon. Always juicy, always tender. Triple yum!

Every year (or at least for the past 2 years now), Disney offers free Disney Dining Plan from late Aug to late Sept. DDP usually comes with a hefty price tag, but for that period of time, Disney throws it in for free when you book a 5 nights/6 days package.

September is a great time to visit Disney, in my humble opinion. Yes, it's hurricane season, but less crowd and "cooler" weather make up for it. Besides, the free DDP just rocks. I always say I don't know how anyone can afford eating at Disney otherwise.

So, we ate a lot during our vacation. The other thing we did a lot was took pictures. I will post our best shots next!
Email Post
Labels: Everything Disney food travel