Our upcoming 1st year anniversary is a wonderful time to start a yearly tradition. I learned about this Anniversary Gift Traditions a long time ago, while working at Hallmark (high school/collage days). I thought it was silly back then, but now I kinda of like it! I don't think Luke will be on-board with me on this really, but maybe I will still do it. Just for fun. If done with creativity, the presents don't need to be expensive at all.

I'd follow the traditional route though; the modern way seems to be very strict (4th and 7th in particular). 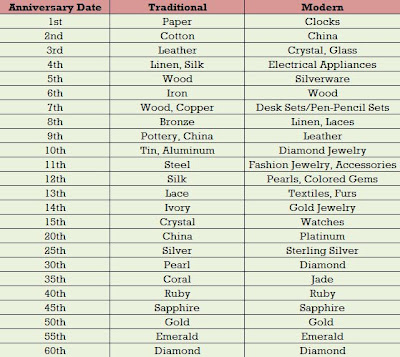 • Tickets to a show or sports event, this gift can be as simple and inexpensive as tickets to a movie or elaborate and pricey as tickets to a sold out Broadway show or sporting event.
• Books, these can range from simple paper backs to collector editions, a signed book from your spouse’s favorite author would make a very memorable gift.
• Photographs, a photo from the wedding or other treasured memory, in a nice frame.
• Treasure Map, this is only limited by your imagination. The map could be to other gifts that you have hidden, or a map to your heart, or a combo of both.

For an awesome example of Second Year, check here.

I am a bit late in the game because our anniversary is in FOUR days and we are leaving for Disney in ONE. It will just have to be a belated anniversary present. =]