According to the Washingtonian, the best places for great cupcakes in the DC area are, in this order, Cakelove, Georgetown Cupcake, and Baked 'n Wired. Well, I beg to differ. Recently, with Seana in town, I tasted them all and here is my pick, in the following order.

I like Georgetown Cupcake the best. The little store is extremely cute, tucked away to the side of busy M Street in Georgetown. The shop is fairly new, only opened in Feb 08, but it's already very popular. There were only 3 people in front of us, but by the time we left, the line was out of the door. Granted, the store is tiny. Selling only cupcakes, it's a to-go place. They only have one small seating area, and it was taken when we were there. Georgetown Cupcake is DC's first and only cupcakery. 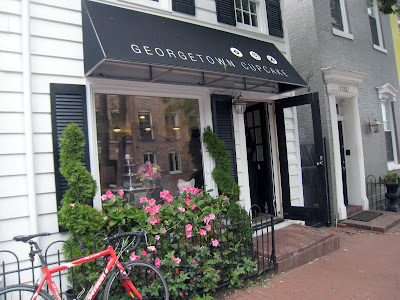 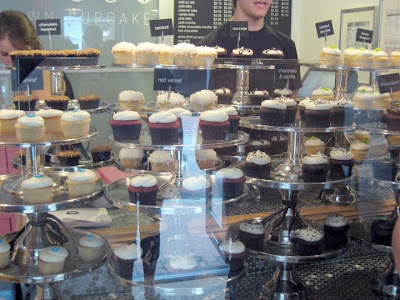 The frosting on the Lemon Blossom had a very light and airy texture to it. I thought it wasn't overly sweet, which is what I like. Combined with the fresh and moist light lemon cake, the cupcake was very good. I will say that I am not a huge fan of lemon cake on it's own, but I liked the combination of the cake and frosting. Seana liked hers as well. Although we shared our cupcake at Baked n' Wired, we did not do so here because the cupcakes were smaller.

Speaking of Baked n' Wire, this bakery comes in second on my list. As you see below, the storefront is nothing to write home about. It is located next to the C&O Canal in Georgetown, near the water. Besides cupcakes, the bakery/coffee shop also sell all sorts of baked goods and different varieties of coffee. It has a nice roomy seating area, a great place to hang out or surf (they have WiFi). The store isn't as bright - think swanky bar. However, we were more interested in the cupcakes anyway. 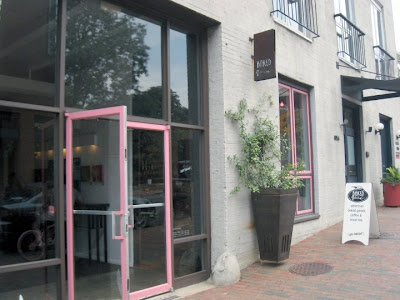 At $3.50 a pop, Baked n' Wired is the most expensive place. However, their cupcakes are big enough to share. Seana and I swapped half of our cupcakes. She ordered a strawberry (made with real strawberries) and I ordered red velvet.

The strawberry cake, while moist and rich, was thick, which isn't a bad thing. The creamy frosting added a lot of the strawberry flavor to the cupcake. This was our first cupcake for the day, and I really enjoyed it.

The red velvet was a bit frozen (the owner told us that she had just gotten it out of the fridge). Compare to Georgetown Cupcake, which all cupcakes were at room temperature, this was a turnoff. I was a bit disappointed with red velvet as it didn't taste much like it. The cream cheese frosting was too thick, but it could be because it was a bit frozen. I definitely think that the cupcake would have tasted better if it was at room temperature, but we didn't have the luxury of waiting. We only had 1.5 hours of parking and we wanted to walk off the calories. 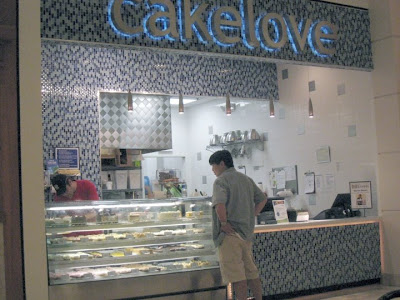 Lastly, I rank Cakelove third. We went to the store inside Tysons Mall. Around the DC/VA/MD area, Cakelove has more than 6 stores! It certainly makes it easy for people to get their cupcakes, but I don't know if I would want to again. We went to Cakelove first, before all others. And while their cupcakes aren't bad, now knowing about the others, I would go to Georgetown Cupcake for my cupcake fix.

Cakelove doesn't provide many options - either chocolate and vanilla cakes. What makes the different varieties are the buttercream frosting flavors, such as peanut butter, coffee, strawberry, raspberry, and more. I got a strawberry on chocolate and Seana got raspberry on chocolate. Luke didn't even get a cupcake, he just got a slice of a random cake on display.

Since Cakelove's owner is a guy, I can understand the lack of cutsy-ness of the store. However, while Georgetown Cupcake and Baked n' Wired have their cupcakes proudly displayed on cute cake pedestals, Cakelove has them in refrigerated shelves.

When we got the cupcakes, the guy told us that it will be better to let the them defrost a bit before diving in. We waited for, oh 5 minutes. I wouldn't say the cupcakes tasted great, but they weren't terrible either. I thought the cake was a bit dry and the buttercream frosting was too buttery. However, it could have been better if it was at room temperature.

Ultimately, Georgetown Cupcake is the best in my opinion. They have the nicest store, the friendliest service, the prettiest cupcakes, and the cheapest price. And, most importantly, they give their cupcakes names, whereas the other two just have boring generic flavor names.

I have liquidated my Cupcake Fund so I am done for now, but I will be the first one in line to try out Hello Cupcake coming soon to Dupont Circle!
Email Post
Labels: Around DC food