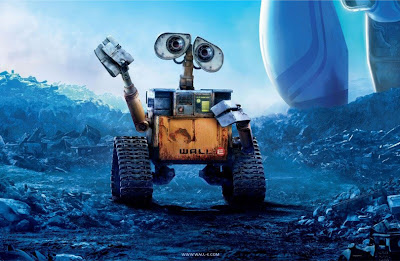 For years Luke and I had two free movies tickets that I had won at Tiffany's baby shower. Whenever a new movie came out (ie. Cloverfield, Transformers, Sex and the City, etc), we would want to use the tickets to see it...but we never got a chance to. Well, we finally used up the tickets yesterday, and they did not go wasted!

I like Wall-E a lot, but Luke loves it - the movie is now his new favorite Disney/Pixar movie, beating out Monsters, Inc. The story is simple and cute, but it also delivers an important message. The animation is so visually rich and well-crafted. Two-thumbs up from Sugarlens!

I am not going to give away the story, but I will say this. In addition to the cute robots, the movie has a subtle message about the nature of consumerism, resulting people into pampered, helpless, and overweight baby-like adults, being totally dependent on automatons and robots. We all know that this message has been told over and over again, in different forms. However, Pixar/Disney did it in a very lighthearted and charming manner in the form of a sweet, trash-compacting robot dutifully doing its job on trash-filled Earth. It is wonderfully done, without going overboard. Oh and yes, there is a love story in the mix too!

Luke already said that once the movie comes out on Blu-ray, he's going to invite everyone over to watch it. Also, Wall-E is ranked among his all time favorite movies Braveheart and Heat. Now that says a lot.

Go see it. Enjoy the story. Feast your eyes on the animation. You wouldn't want to miss it!

PS. I wouldn't mind spending a week on Axiom though, the facility and service looks a-ma-zing. :)