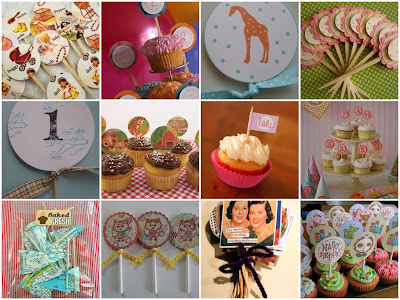 Whenever I am stuck for ideas, I turn to my two most valuable resources, Etsy and Flickr, for inspiration. I have been on a cupcake topper craze as of late. I am itching to make some! I told Luke about the vision for my big project and I think he said something along the line of being crazy and having too much time on my hands. Hmph.

Anyway, the collage above are just few of my favorites - aren't they just too cute for words? Since my cake decorating skills are far from advance, these would come in handy in spicing up my cupcakes!

From the look of it, in addition to creativity and patience, I will also need these tools/supplies to get me started: round punch, assorted scrapbook papers, glue dots, thin ribbons, access to color printer, and plain ol' cardstock. Time to go shopping.