The Plan That Didn't Pan Out

The story of Pesto started more than a year ago when we moved into Oakie. After the moving dust settled, Luke and I decided to add a second dog to the family, thus began my long search. This is a lengthy story - so settle yourselves back in your seats and read on.

In 4/07, I called the Wolperts (Fred and Marcia/husband and wife), a breeder in Maryland, where we got Pargo (Luke found them the first time around via the AKC website). The Wolperts is very reputable in the area and compete in various dog shows. Being the responsible breeder that she is, Marcia asked me about Pargo's size and temperament to make sure the new puppy would be a good match. Pargo is just a bit more than 3lbs and has an extremely easy going personality. He does not warm up to other dogs as quickly as he warms up to people. This was more or less what I told Marcia. 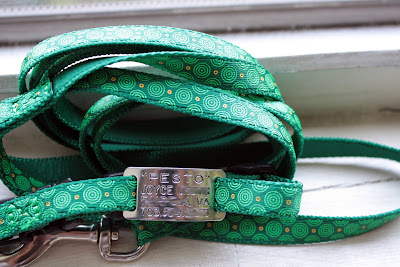 Upon hearing that, she said that my next dog would have to be no more than 4.5lbs in size and must have Pargo's personality to match. Breeders usually aim to breed yorkies that are approximately 5-6lbs. Anything less than that increases the chance of the dogs being unhealthy and too fragile. Pargo was the runt in his litter of two so he is tiny by nature. A good breeder doesn't breed "teacup" puppies ("teacup" is a term referred to puppies that are less than 3lbs), but once in a while, they may get "teacup" size puppies. Once in a while.

So back to when I called Marcia in 4/07, after I told her about Pargo, she told me that she had a couple of young puppies but it was too early to say how big they would get full grown (usually, you take the puppy's weight at 12 weeks and double it for the estimate full grown weight). She said to call back in a month. The timeline gets a little bit fuzzy after this because I don't remember everything, but I recall calling her several times until in early 7/07 when she told me that she had a puppy for me! We were ecstatic! She said the puppy would be no more than 4.5lbs full grown and perfect for Pargo. We scheduled to pick up the following weekend. I was so excited that I could hardly contain myself! Unfortunately, during the week, she called informing me that the puppy had a grow spurt and would be more than 6lbs full grown. Therefore, she decided not to sell it to us. (I blogged about this before) After this, my research became less aggressive because the wedding was right around the corner.

Side note: Of course I didn't put all my eggs in one basket, between 4/07 - 7/07, besides keeping in touch with the Wolperts, I also contacted several breeders in the MD/VA area. No one had anything or a match.

After we got back from Disney, my search started back up and a breeder (also from the AKC website) in Gainsville, VA had a boy puppy available (older though, 8 months old if I remember it correctly)! The puppy was already 5.5lbs and still growing. This particular breeder, however, assured me that size wouldn't be a problem. I was desperate so I agreed to take a look. Once I got there and met the puppy, I just didn't have a good feeling about bringing him home. He was almost twice as big as Pargo and didn't connect with us like Pargo did when we first met him. When we first met Pargo, he came straight to us and sat down. He sniffed a little but otherwise very calm and curious about us. This puppy, however, couldn't care less about me or Pargo and ran around like he had much better things to do. I passed.

After that, we decided to wait because we were leaving for Hawaii soon and after we came back from Hawaii, we didn't think winter would be a good time for a new puppy. Fast forward to 3/08 when we celebrated our second anniversary with Pargo and I decided that it was time to look again. I called Marcia in early 4/08 and she said to call again in late 4/08 for updates. I emailed in late 4/08 and didn't hear anything until last Sunday when she wrote me back with these words that were music to my ears:

"Joyce, If you are still interested, I now have a really small male who would be the right size and temperament for Pargo. Please get back to me if you are interested. -M"

I called within minutes after receiving the email and confirmed that I am still terribly interested and would *love* to go see the puppy. After going over some details, we made an appointment for today, 6/21, for pick up.

As you can imagine, this whole past week I could hardly sit still. I didn't tell too many people because I didn't want to jinx it. I finally made it to Friday night and haven't heard anything from Marcia regarding cancellation, etc. I thought I was really going to get a new puppy! Then the dreaded call came at exactly 7pm last night.

"Joyce, the puppy had messy stool today and I just can't let him go yet without knowing that I am giving you a healthy puppy."

In a way, I am glad that she's being a good breeder and doesn't want to give me an unhealthy puppy, but on the other hand, I am totally crushed. Marcia said she will take the puppy to the vet on Monday for a checkup, if everything is okay, the puppy is still mine and we will just reschedule another time for pick up.

The search for Pesto has been a long and curvy and it's not quite over yet. I am still optimistic though. When I see Pesto home, growing up with Pargo, it will all be worth it for me. Until then, I will end this post with this picture of Pargo.

Upon hearing that he would not be getting a little brother this weekend, Pargo made an angry face. 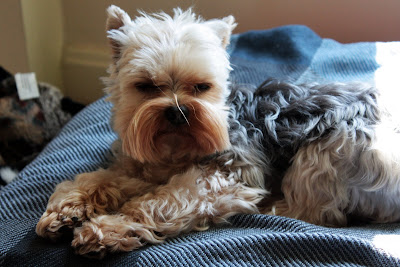