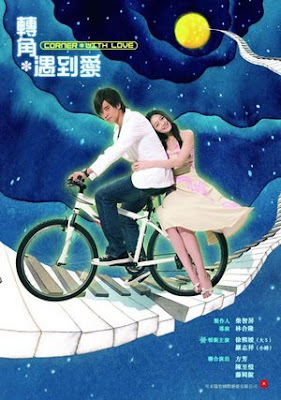 Except for a selected few, I usually can't stand watching Taiwanese mini-series without hitting the fast forward button. Often times, the stories drag on and on for no particular reasons. And even though the silly romantic comedies I watch obviously come with a degree of cheesiness, sometimes the cheesiness is just too much, even for me.

However, when Luke introduced me to the Taiwanese drama, Meteor Garden, starring Barbie Hsu (徐熙/Xu Xiyuan), I immediately liked Shan Cai's (the heroine) spunky and fiery personality, as well as the story. I couldn't get enough! Although some parts of the story could be taken out without ruining the storyline, I thoroughly enjoyed it and rooted for Shan Cai from the beginning to end. I ended up watching Meteor Garden 2 on my own and liked it just as much. I just love a good romantic story with light-hearted banters!

The stories of the Meteor Garden series can be sum up with this:

Unlikely couple
+ Fiery passion
+ Big breakup
+ Multiple attempts at getting back together
+ Commitment
=Predictable, but delightfully corny "happily ever after" ending!

In other words, a total chick flick and perfect for me.

Last night, Luke and I started to watch another one of Barbie's dramas called Corner With Love. We watched more tonight and I just can't wait to finish the series (16 episodes in total). I already know that I like Barbie's character, Xin Lei. She's full of pride and determination - qualities that I admire in people. I also have a feeling that the underlying story is going to be very similar to Meteor Garden, which means the drama probably won't be a disappointment! =D