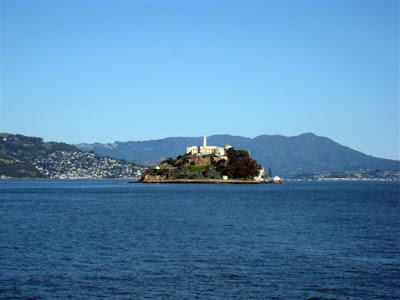 Before we left for San Francisco, I bought two early-bird tickets to Alcatraz. Alcatraz may be a tourist trap, but I couldn't wait to go. I like prison movies (The Rock and The Shawshank Redemption are two of my favorite movies) so I was really looking forward in going to a prison!

I got the tickets from here, and booked the 9am departure ferry to Alcatraz Island. It was $24.50 per person and worth the price because we got to cruise on the bay again. The night tour is very popular and provides a more intimate experience, but we skipped it because of Luke's schedule. Instead, we went bright and early to avoid the crowd.

We saw the Golden Gate Bridge again. The ride to Alcatraz was bitter cold and windy. I think that is typical whenever you are on the water. However, once we got to the island, I didn't feel cold at all. The sun was shiny and it was another gorgeous California day! 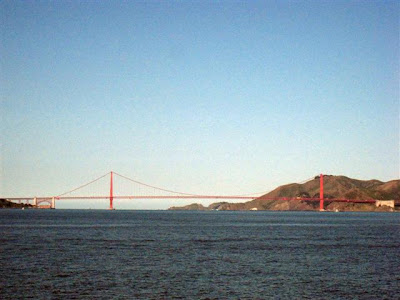 Whenever Luke and I travel together, he holds on to the camera more than me. This is why there are always more pictures of me than of him. This picture here was taken when the boat was docked. Behind me, up on top, was the cell house. 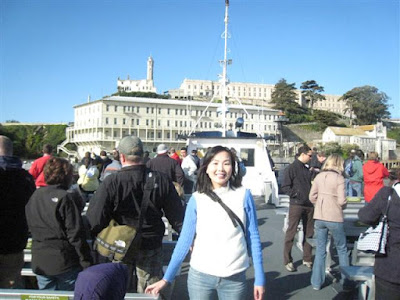 Most people don't know this, but the prison isn't the only attraction on the island. Alcatraz is home to rare flowers and plants, marine wildlife, and thousands of roosting and nesting sea birds. There were lots of great photo spots and I enjoyed the grounds just as much as the cell house.

Behind me in this picture was the Officers' Club - where the prison staff and their families had their socials or gatherings. Something interesting I learned about Alcatraz was that there were actually families living on the islands, along with the inmates. I am talking about little boys and girls. Those kids rode ferries across the bay to school every day and came home to the island in the afternoon. In the orientation film that we watched, there was an interview with this old lady who, as a kid, lived on the island. She said that the families never saw the inmates because they were all kept in an enclosed area. She also mentioned that life on the island was very peaceful and she enjoyed it very much. They had their own very tight-knit community. It just sounded strange to me, though. 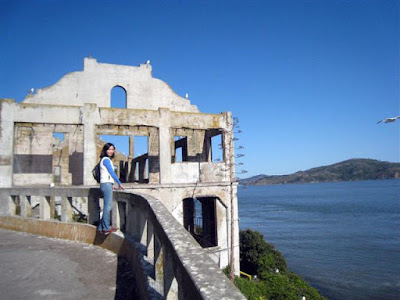 We had just finished watching the orientation film and on our way to the audio tour! 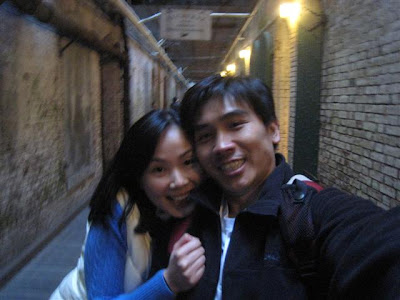 The audio tour was surprisingly very good! I am not a fan of audio tours (because I always find myself lost or confused) but this one kept my interest because it was narrated by previous inmates and prison staff. Instead of boring monologues, there were conversations between inmates and a bunch of sound effects to keep the audiences hooked. It also included a very good story on one of the attempted escapes!

There were 3 levels to the prison. Here was a row of cell houses. Each cell was only 9" x 5". Very tiny! 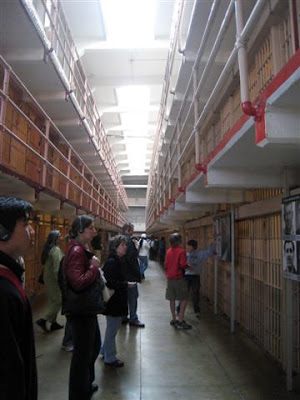 There were a few open cells for posing. 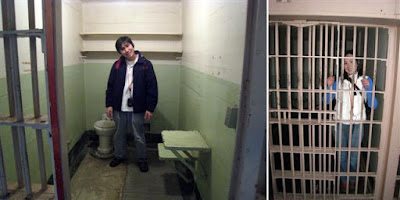 The picture on the right was a regular prison cell, the one on the left was where they put the inmates (up to months) when they misbehave. There were 6 of them. The inmates were kept in the cell 24 hours a day except for a 15-minute shower if I remembered it correctly.

As I mentioned, on the island were rare flowers and plants. When the audio tour took us outside, we stayed out for quite a bit that we had to stop the audio. Outside, we enjoyed the sights and the sun.

Some pretty purple flowers with the Golden Gate Bridge. 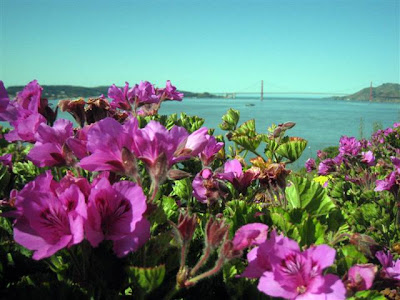 Wild calla lilies were everywhere on the island! I prefer mini callas a lot better though, they are much more elegant. The big ones are not as pretty. 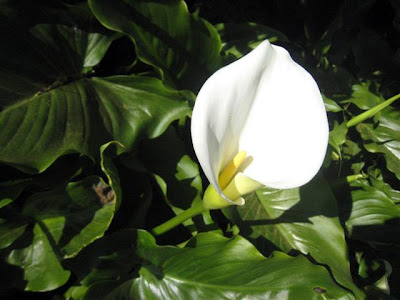 One of Luke's artistic shots. 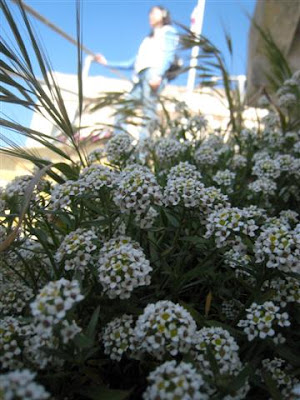 The building next to us was the Warden's House. It once had 15 bedrooms in it! For those inmates with good behavior, they got to tend the garden of the house. Nowadays, the grounds on the island are tended by volunteers. 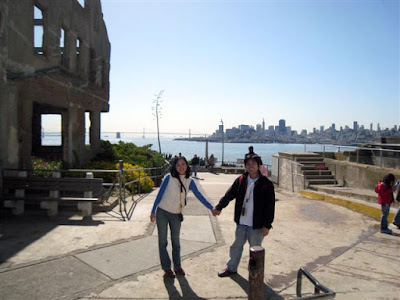 One of the last stops of the tour was the dining room. 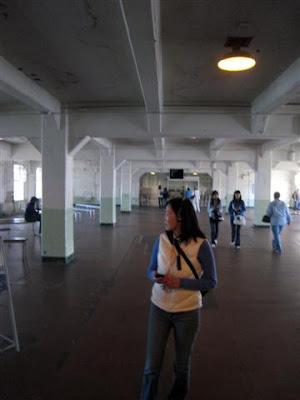 The kitchen. On the left, there were knives hanging on the wall. I learned from the audio tour that the shape of each knife was traced on the wall. This way, if one knife was missing, it could easily be noticed. 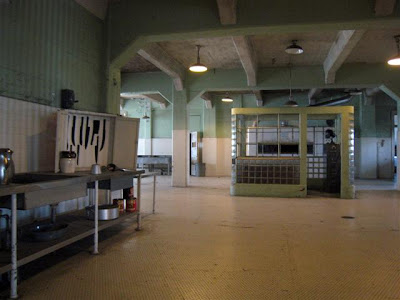 We ended up spending more than 3 hours on the island just touring around. At the gift shop, we both tried on the prison hat. Here is Luke on the left, doing time at Alcatraz. Here is me, happy to be getting out of jail!

Overall, it was time well spent. It's crazy to think that just a mere 45 years ago (the prison closed in 1963), there were prisoners walking around on the very ground I was on.