Summer Of Love No More

My trip to San Francisco went by in the blink of an eye. Although it went by quickly, I had also did so much that by the last full day, I only had a few more places to visit. 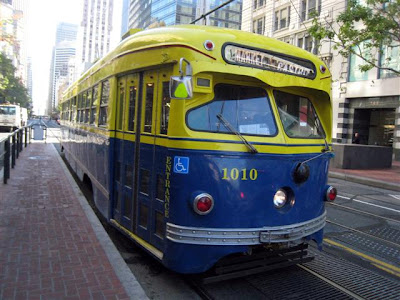 The Haight-Ashbury district is part trendy, part nostalgic, and part funky. It was the soul of the free-loving 1960s and the center of the counterculture movement. Today, there is a Ben & Jerry Ice Cream right in the middle of the main intersection. Yes, the Summer of Love is long gone, but it was still a fascinating place to visit and people-watch. The Haight offers ethnic food, trendy shops, and bars cover all tastes. There is something for everyone. 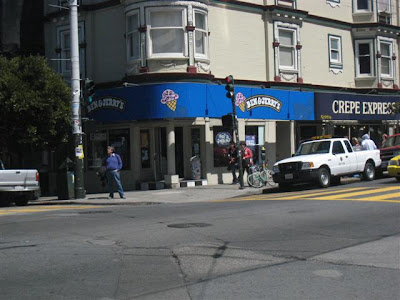 At the intersection of Haight and Ashbury (see the street signs) 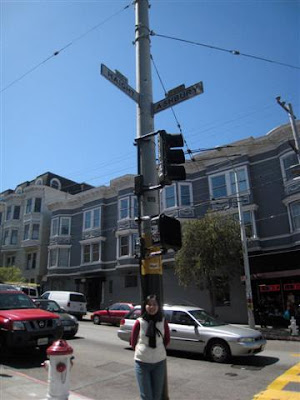 Yes, I was very discrete when I took this picture. 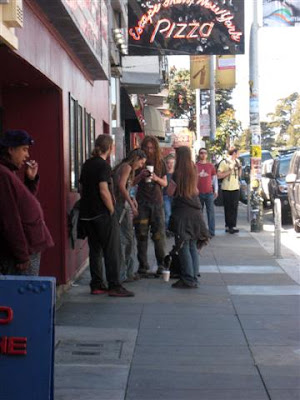 I had more than enough time at Haight-Ashbury because I was waiting for Linda. I went to the side streets (more quiet and more Victorian houses) and even bought a book from The Booksmith (*gasp* I paid retail! Something I never do, but I wanted my own copy of Lonely Planet SF). By the time Linda arrived, I had walked up and down the street several times and read all the menus posted outside of the restaurants.

Scenes 'round the neighborhood. 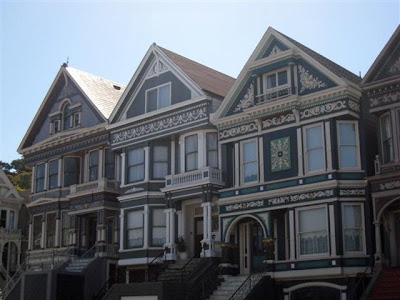 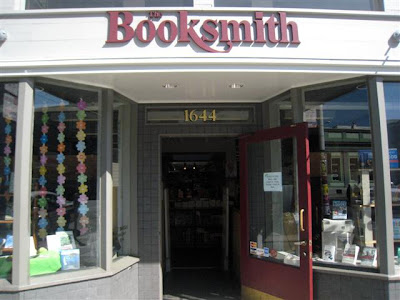 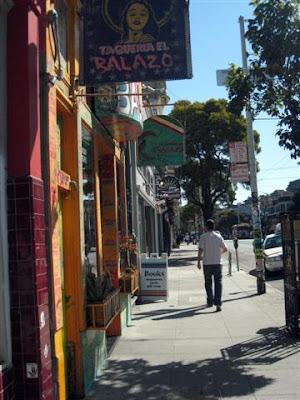 We had lunch at the Citrus Club. From the outside, Citrus Club looked a little sketchy, but the Zagat-Rated sticker caught my eyes. The inside was much cuter and homey! We both had pho noodle soup and it was delicious and cheap. I don't know why I like noodles so much when I am away from home.

We then went to Union Square, the major commercial hub of SF. Major hotels and department stores are crammed into the area surrounding the actual square. A plethora of upscale boutiques, restaurants, and galleries occupy the spaces tucked between the larger buildings. On that particular day, there was an Art Fair showcasing local artists at the square. Linda and I were much more interested in that then the department stores. 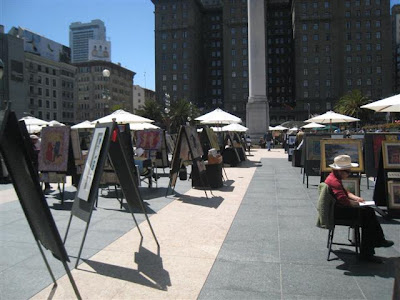 We spent some time browsing and I bought a piece of artwork as souvenir. I even took a picture with the artist, Karin Diesner of Karin Diesner Designs . The sun was right in my eyes and my face was awful-looking, so I cropped myself out for your (the readers) sake.

This painting is now framed and hanging in our dining room. 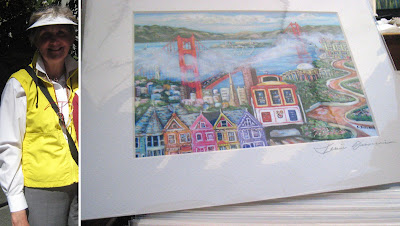 On the way to the Cable Car Museum, we stumbled upon this snack shack. Yum, salty fried chicken. As I mentioned before, the Chinatown in SF is largely Cantonese-based, so it was great to find a little piece of Taiwan. I even saved some for Luke! 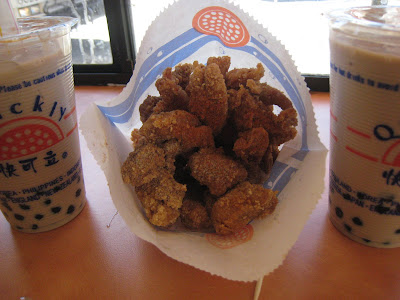 The Cable Car Museum is a free museum and fairly tiny, but here is where visitors can learn all about cable cars. I learned, 1) cable cars have no engines, 2) the cars run along a steel cable and that is what “moves” the car 3) the cars move at a constant 9 ½ mph – never more, never less, and 4) first cable car made its debut in 1873. I feel that much more educated now. 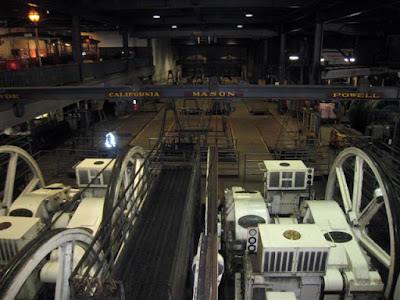 Shortly after the Cable Car Museum, Linda and I said goodbye and promised to keep in touch. That night, Luke and I went to Chinatown for dinner (again!), but no pictures because I forgot to put the memory card back in the camera after I took it out. After dinner, we slowly strolled back to our hotel, knowing that our trip was coming to an end.

As I've told many people, San Francisco was one of the best trips I've taken. The sights, the food, the weather, the people. Everything exceeded my expectations. I most definitely want to visit again and, next time, be Luke's tour guide!

Related Posts:
Hello There!
Under The California Sun
Two Happy Inmates
Steps and Tower and Chinatown! Oh, my!
The Wharf! Check! Pier 39! Check!
An Afternoon In The Park
The Painted Sugars
Email Post
Labels: travel