While we were in San Francisco, not only my parents took care of Pargo, but also my herb plants. Because it would take several trips to move the pots, on the night we came home and picked up Pargo, we didn't bother to move them at that time (it was pouring rain that night, too). So yesterday after work, I stopped by my parents' to pick up my babies. Unfortunately, holding a pot in each hand, and at the same time trying to open the screen door, the cilantro pot slipped through my hand and cracked right in front of me. Bam! The last 1.5 months of caring for it flashed through my eyes.

Luckily, the cilantro roots were wrapped around the dirt and held the dirt in the shape of the pot. So while the pot cracked, the plant survived. I salvaged what I could and took it back home. This is probably a bad description, so here is a picture to show what I mean.

See, even without the pot holding the dirt, it maintained its shape. 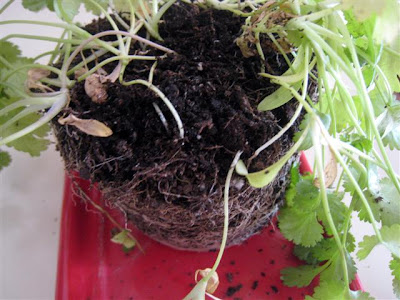 After seeing this, I realized that the pot was too small for the cilantro and for it to grow bigger, it probably needed to be in a bigger pot anyway. So after Luke came home, he put it in a bigger pot, and added more soil. I hope the roots aren't damaged too much and they will continue to live. And maybe with a bigger pot, it will grow stronger and healthier. Maybe what happened was a blessing in disguise after all? 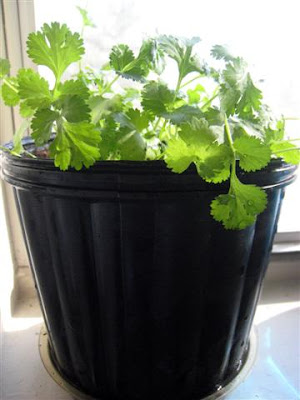 On the other hand, the basils are doing just fine. The pot may be too small too, but they are growing quite well. Look how tall they are in this picture. 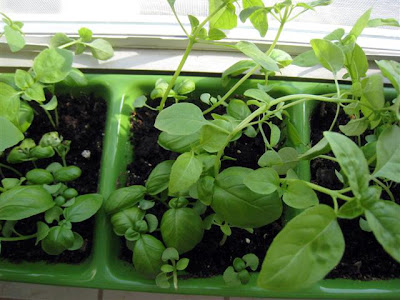 Luke decided to trim the basils down a bit. This way, they can grow wider and bushier, rather than tall and sparse.

A handful of basil straight from our garden! They were still young and tender and we would not had cut them if it wasn't to help the plant grow more/better. 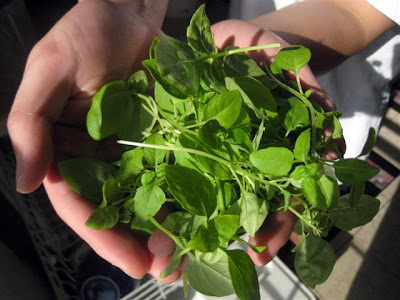 Tonight we had basils for dinner! This dish can't be any simpler to make. All you need are a couple of eggs, basil leaves, and soy sauce.

1) Add some oil to the pan and drop in the basils. Cook until they are wilted.
2) Scramble the eggs, add some soy sauce to the mix.
3) Add the egg mixture to the pan.
4) Cook the eggs until done.

So simple. So tasty. 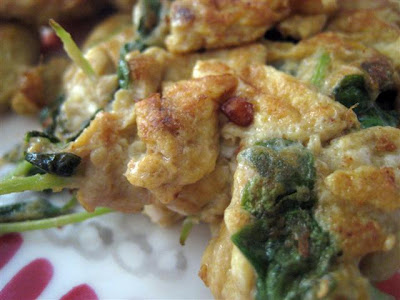