The Lombard Street is known as "crookedest street in the world". This was a small attraction, shouldn't had taken more than 10 minutes to see, but I spent almost half an hour here, waiting for Linda. From my hotel to Lombard, all I had to do was take the Powell-Hyde Line cable car and it dropped me off right in front of it (on the top). Unfortunately for Linda, she had to take a bus, which never showed up. Instead, she took a different bus and walked her way to meet me. By the time she arrived, I had taken the staircase up and down twice and took a few self-portraits. The sweet lady even brought me breakfast so I chowed down some chicken pastry while she caught her breath.

The cable car dropped me off here, the top of Lombard Street. The brick-lined street zigzags around the residences' flower gardens (not in bloom when I was there). It's a short stretch and one-way down the hill. I saw many tourists taking the drive. Some even funnier - the passengers actually got out of the car, stood in the middle of the street, and took pictures of the drivers while they slowly drove down. Luckily, since it was not crowded, they were able to do that without causing too much traffic. 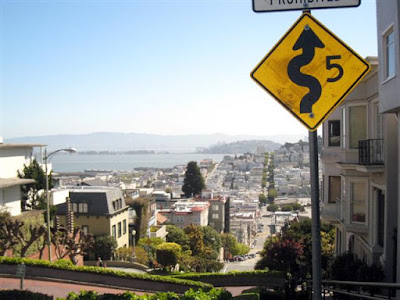 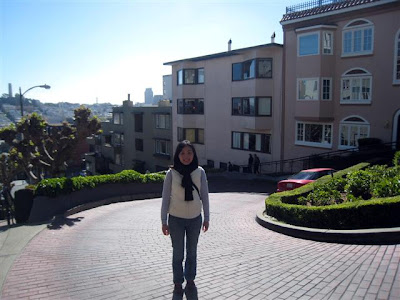 Strange, the pictures I see on postcards are so much better. :P 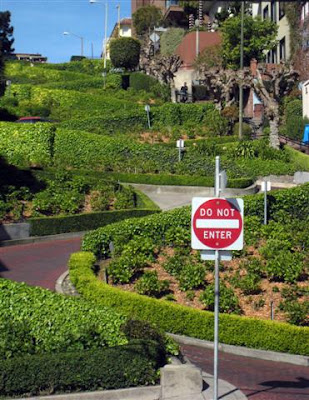 The beautiful Palace of Fine Arts, a park with lagoon, is the perfect place for picnics and relaxation. The main attraction here is The Exploratorium, a science museum, geared towards kids. On that day, we saw many children in school uniform there.

Sadly, the dome was under construction. But I had already seen it before so it wasn't a big deal. 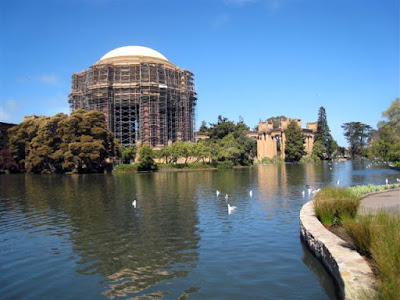 Palace of Fine Arts has appeared in many movies, including one of my favorites, The Rock. 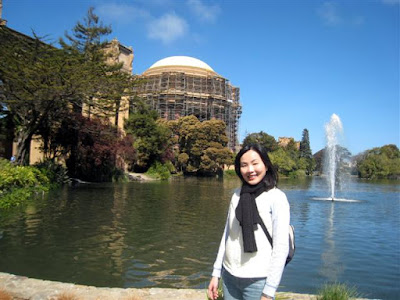 Next stop was to the most photographed bridge in the world. The bridge is often covered by the city's rolling fog, however, on that clear day, we saw everything. I never knew this, but the Golden Gate Bridge is a frequent site for suicide. According to wiki, "the deck is approximately 260 feet above the water. After a fall of approximately four seconds jumpers hit the water at 75 miles per hour, which is nearly always fatal." 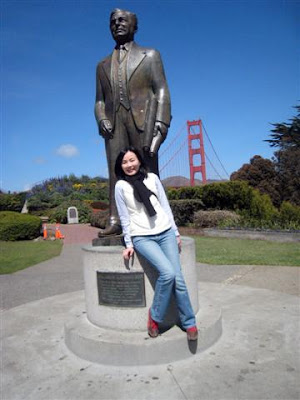 The round building behind me is a small cafe and gift shop. The landscaping was top-notch. Pretty and colorful flowers were in bloom! 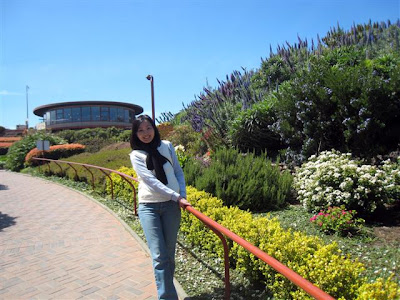 The length of the bridge is 1.7 miles. We walked about a third of the way. It wasn't an easy walk with the wind and traffic noise. Linda didn't really want to walk at all, but all the research I found said that it's something that must be done once in your lifetime. So we compromised and walked a little bit. Next time, Luke and I will walk the entire way. :) 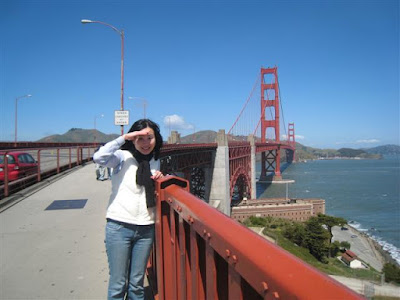 One more picture with the purple flowers. 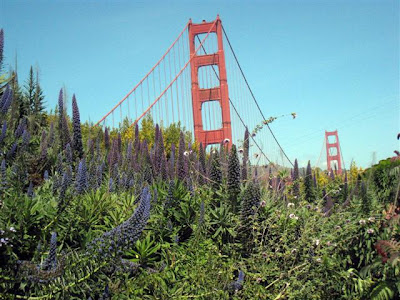 You must be thinking, "another picture of the bridge??" Actually, this picture was taken at a completely different location. By then, we had already taken another bus ride to the northwest corner of SF, where the Golden Gate meets the Pacific. So the body of water you see here isn't the Bay, it is the Pacific Ocean. This northwest corner offers several trails, but I don't see how anyone could really enjoy it with the heavy wind. The northwest corner is the wildest, rockiest corner of SF. It can be treacherous if not careful. The cliffs have claimed many victims. 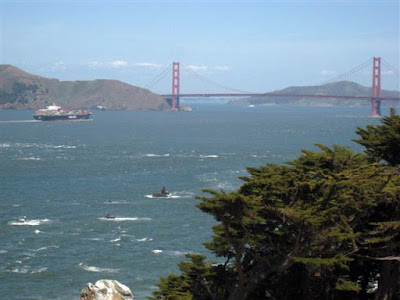 Next we went to Japantown for lunch! The main attraction of Japantown is the Japan Center, a shopping mall occupying 3 square blocks. The Japan Center is actually divided into two malls. The one pictured below is the Kintetsu Mall, which is the better one of the two, with more shops and restaurants. I love Japanese stationeries (they are so cute and well-made) and I visited a couple of paper stores. 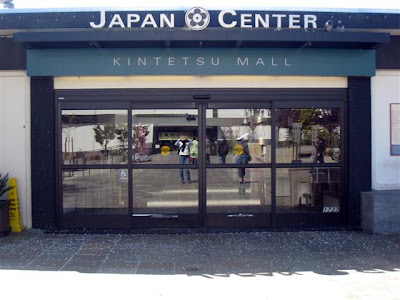 This, at the center, between the two malls, is the five-tiered Peace Pagoda. 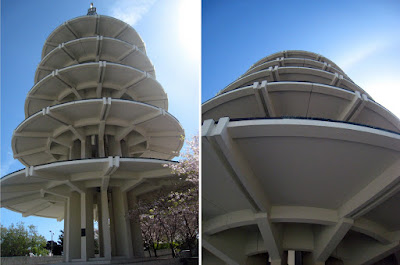 The pagoda is located at an open square with many places to sit. Japantown isn't terribly big at all, in fact, this picture below is pretty much the whole Japantown, minus the 2 malls. 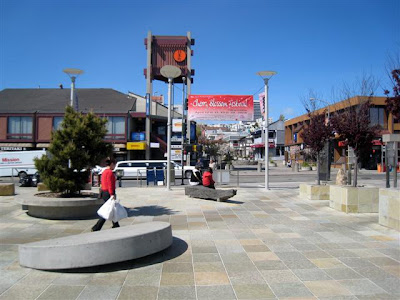 Nearly all the restaurants in the Japan Center have a food display through their windows. Did I ever mention that I looooove looking at food?

We found one that we both liked and we both ordered the same dish - chicken soba. Soba is a type of thin Japanese noodle made from buckwheat flour. It is served either chilled with a dipping sauce, or in hot broth as a noodle soup. The soup was a bit too salty, but I really liked the noodles. Soba is my new favorite type of noodles! Much better than udon.

After we ate, we walked a bit more to digest. There were many places selling crepes, and while Linda went to check one out, I wondered into a bookstore. First thing I saw was this Doraemon bag! I am a long time fan of Doraemon. I grew up with the comics while living in Taiwan. I love Dorae! 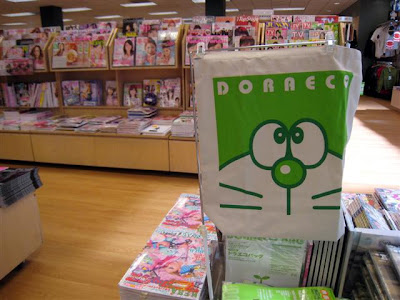 One of the most famous views of San Francisco - seen on postcards and posters around the city - depicts sharp-edge Financial District skyscrapers behind a row of Victorian homes. This picture was taken by me, from Alamo Square. It was an easy walking distance from Japantown. For those who used to watch Full House, you should remember these houses well. These "Painted Ladies" are private residences. We looked it up, they all cost well above 1.5 millions! I wonder if I would feel strange if my house was seen everywhere on posters and postcards. 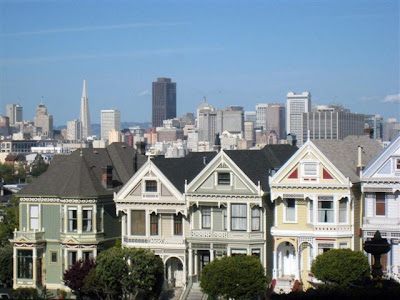 We also made a quick stop at The Civic Center area. This here is the City Hall. 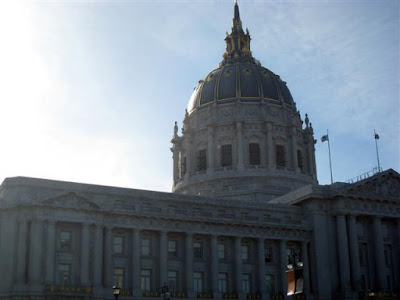 Finally on the way to catch the streetcar back to the hotel, we past by this flower vendor ready to wrap up for the day. As he was packing up, he was tossing out not-as-fresh bouquets for anyone to take. Linda picked up 3 and I took 1 back to the hotel. In this middle picture, Linda had actually already had her 3 bouquets picked up, but I asked her to drop them and pick them back up so I could take a picture of her in action. And she did! So cool of her. :)

Luke and I went to Chinatown again for dinner that night. We had steam mini meat buns, sweet and sour fish, and Ma Po tofu. I wasn't as tired as Day 3 because Linda and I took it slower and all the attractions we visited were relatively close and low-impact. It was yet another delicious meal. You just can't go wrong with dining at any of the restaurants in Chinatown! 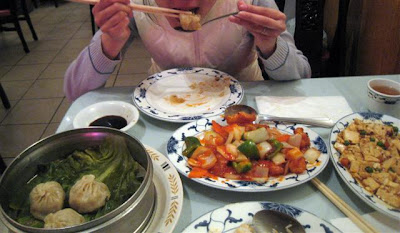 On the way back to the hotel, Luke picked up some late night snack. 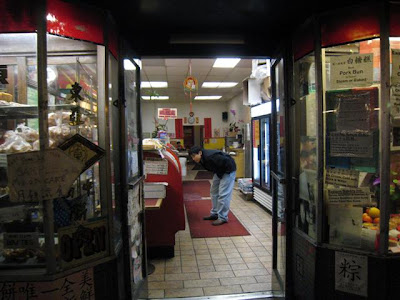 Related Posts:
Hello There!
Under The California Sun
Two Happy Inmates
Steps and Tower and Chinatown! Oh, my!
The Wharf! Check! Pier 39! Check!
An Afternoon In The Park
Email Post
Labels: travel