I should have posted this map earlier. For those who may be unfamiliar with Washington, D.C., this map (click to enlarge) gives you a better idea of the general area around Tidal Basin. We started our walk at the Japanese Lantern and ended it after the Welcome Area (where they had gift shops and food vendors). It took us about 2 1/2 hours to walk the blue path (yes, I don't have the steadiest hand). 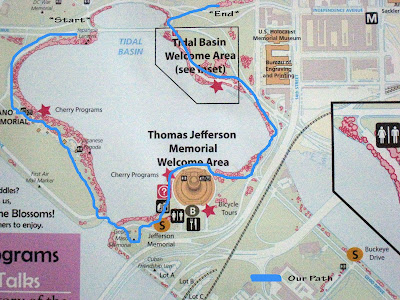 Similar to the WWII Memorial, I don’t find the FDR Memorial particularly interesting, although I must admit, it is aesthetically appealing. It's very open with lots of places to sit and a good stop for a little break. The Memorial opened to the public in 1997 and it spreads over 7.5 acres. It is organized by a sequence of four outdoor rooms, one for each of FDR’s terms of office. The Memorial is filled with engravings on the wall, statues, and even small man-made waterfalls. My personal favorite status is the one of FDR’s dog. If Pargo was a statue, he would look very similar to Fala.

Taking advantage of the self-timer and light crowd, my mom and I took a picture here together to remember our outing. I always like to get at least one picture of me and my traveling companion, in addition to all the scenic photos I may take. This way I can really say, “Been there, done that. And I did it with so and so." 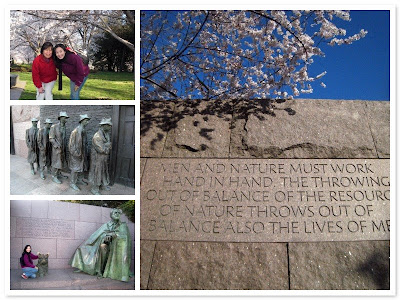 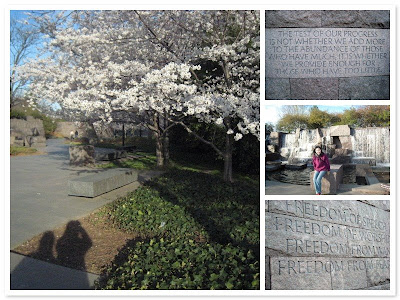 After we left the FDR Memorial, I took more pictures along the way to the Jefferson Memorial.

We saw the Japanese Pagoda... 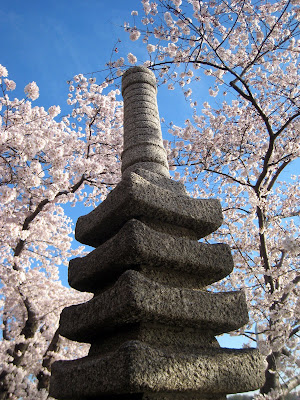 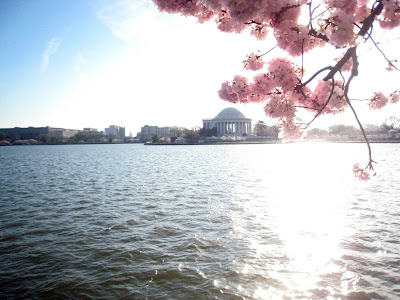 No blossoms in this one, but this is the only picture I took with both the Jefferson Memorial and the Washington Monument in it. 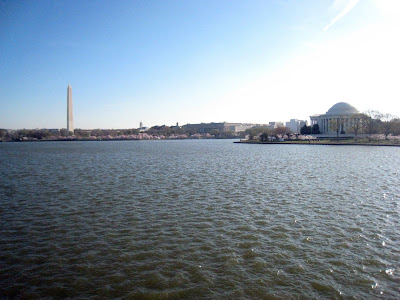 That morning, we saw 2 couples having their engagement photo shoot. Being the nosy person that I am, I took pictures of the photographers and the happy couples in action. The photographers definitely picked the best spots. Look at that gorgeous light! I should’ve followed them around. It was amusing to see that people would do anything for nice pictures. I bet the first girl was freezing. I am the same way really. Under my Barney-color fleece, I was nicely dressed for photo opportunities. Unfortunately, I never took off my fleece throughout the day. Oh well, I was more interested in scenic shots anyway. 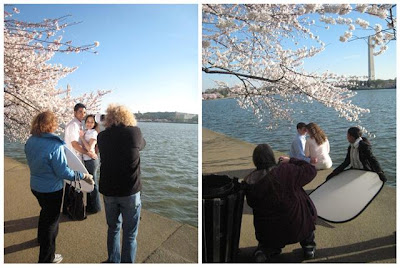 We soon arrived at the Jefferson Memorial. The Memorial is located on the shore of the Tidal Basin, and was completed in 1943. According to Wikipedia, the Memorial is not as popular as the other buildings and monuments/memorials in D.C., due to its location being further away from the National Mall. Because I like to be different, I am going to say that the Jefferson Memorial is one of my favorites! Perhaps it is because it reminds of The Rotunda at UVA. I like the circular colonnade, they are very stately. Inside the Memorial is a statue of Jefferson, and the walls are engraved with Jefferson’s writings.

We asked a fellow visitor to take this picture for us. The photo is overexposed. The Washington Monument is behind us, but you can hardly see it. 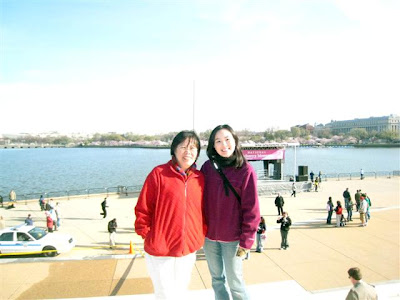 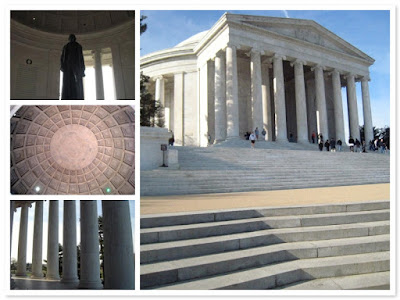 Another fun way to enjoy the blossoms is to rent paddle boats and paddle your way around the Tidal Basin. Since it was still early in the morning, the boat house was just opening up. We didn’t see anyone paddling, but I’ve done it before a couple of years ago. It was fun seeing the cherry trees from a different perspective, but not something I would do it over and over again. The rates are $8 for a 2-passenger boat per hour and $16 for a 4-passenger boat per hour. Very reasonable I think. 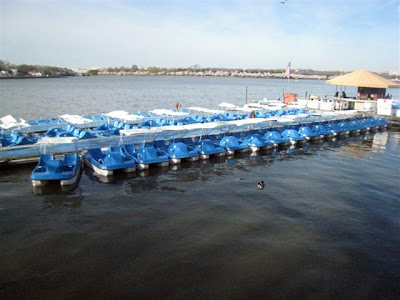 After passing the boat house, we say goodbye to Tidal Basin and started walking toward the grassy area in front of the Washington Monument to see some kites.

Up next: “Kite Festival & The Rest”