An Afternoon In The Park

I don't know about you, but when I first visited Central Park in Manhattan, I was in awe that in this bustling city, there is such green playground for the locals and visitors to come, play, and relax. I loved it that while inside Central Park, I could see the famous New York skyline, but yet be surrounded by trees, grass, and water.

The Golden Gate Park in San Francisco, similar to Central Park (except it is even larger!), is a large urban park filled with gardens, lakes, museums, and playgrounds connected by wooded paths and paved roads. Linda and I spent the entire afternoon and into the evening touring the various attractions in the park.

Japanese Tea Garden (admission $4) - one of the most beautiful and serene places I have ever visited. It's a quiet place with cherry trees, bonsai trees, pagodas, and high-arched bridges over pools of water. I am glad we were there on a weekday because there were fewer people. The sceneries were just beautiful. It even has a small teahouse, with waitresses wearing authentic Japanese kimono.

Linda took these pictures for me! She kept on saying that my green sweater was perfect with the backdrop. :) 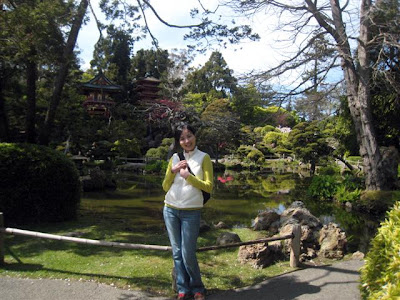 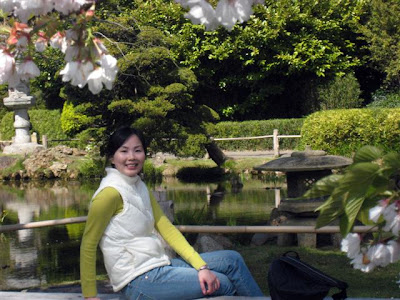 The teahouse over one of the many pools of water in the garden. I did not get a chance to look at the menu, but I imagine it fairly pricey. On a non-busy day, I am sure it is okay to grab a chair and relax under the roof without having to order anything. Very nice atmosphere. 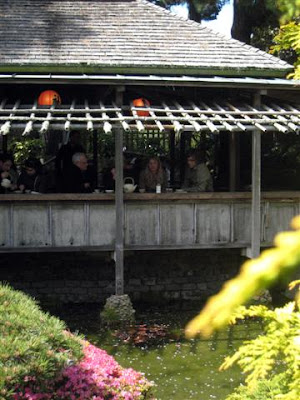 There were several of these stepping stone paths throughout the garden. The entire garden was well-maintained and kept in tip-top shape. The bonsai trees were manicured, and I didn't see a single piece of trash during my visit. I understand that the admission price has been creeping up through the years. My tour book, which was actually a 2008 edition, indicated $3.50 admission fee, but I paid $4. 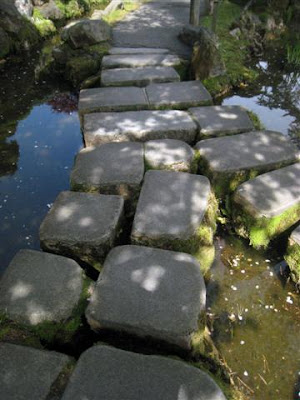 This is the moon bridge in the garden. Yes, I climbed over and it was harder than it looked.

We happened to be there when the cherry trees were in bloom. Lucky! 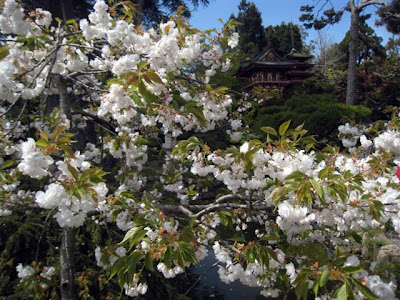 I am so jealous of San Franciscans! I don't think there is anything this picturesque in DC! 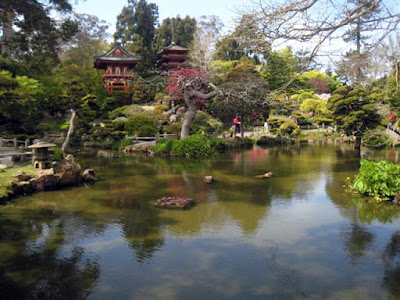 Just a few more around the garden. The Japanese Tea Garden is a must visit for everyone. A lot of tourists overlook Golden Gate Park in favor of other attractions such as Fisherman's Wharf, Golden Gate Bridge, Pier 39, etc. However, I highly recommend this place. It's a hidden gem! 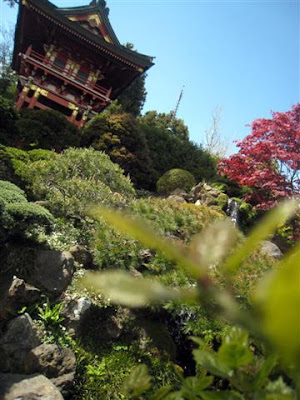 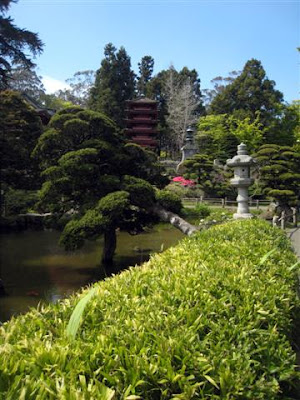 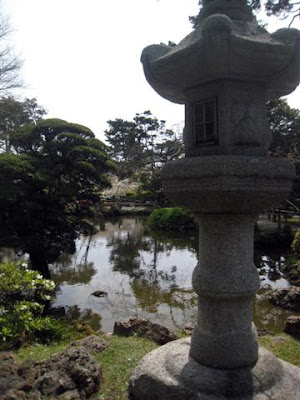 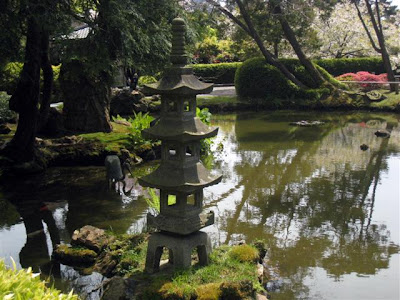 de Young Museum (admission $8, with Muni Passport) - closed for several years, this San Francisco's oldest museum was reopened in late 2005 in its new Gold Gate Park facilities. I am usually not into museums (why come here for museums when DC has tons, for free). However, this museum received a 3-star in my tour book (the highest rating) and Linda wanted to see it. So I accompanied her.

The exterior of the building. I am mad at myself for not knowing this when I was there, but apparently the top of the tower offers panoramic views of the entire Bay Area. I can't believe all we did was wonder around the first 2 levels and look at paintings. Anyway, the museum has a good collection of American paintings from the Colonials times through the 20th century. It also has several exhibits that change constantly. When I was there, there was a photography exhibit, which was my favorite. 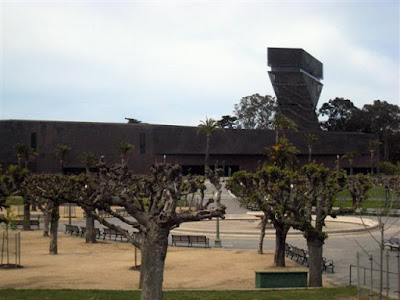 Strawberry Hill/Stow Lake (admission free) - the best way to enjoy Stow Lake is to rent a paddle boat or rowboat and cruise around. We didn't, unfortunately. Instead, we walked along the shoreline. Along the way, we also saw joggers and mothers pushing strollers. As I mentioned before, it was a cold day, but people were still out and about. People out west really do maintain a healthier lifestyle. 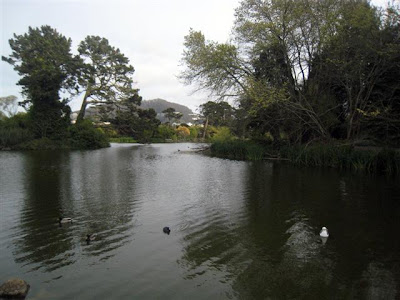 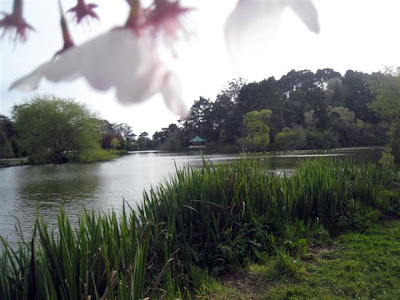 A romantic Chinese pavilion. I can imagine Stow Lake most get lots of visitors when the weather is nice. 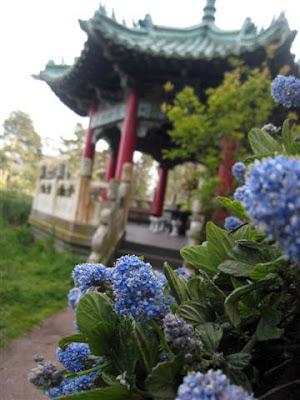 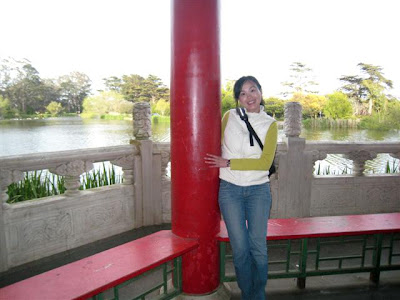 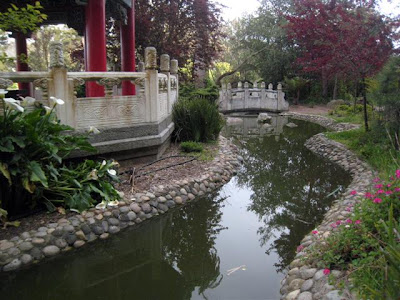 Strawberry Hill is in the center of Stow Lake. This here is Huntington Falls, which tumble down the hill into the lake. 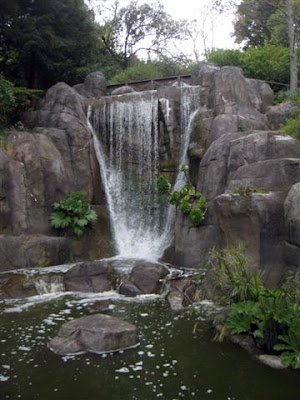 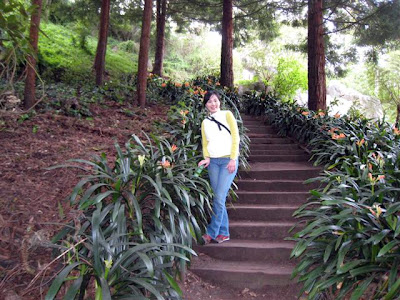 SF Botanical Garden (admission free) - we discovered this botanical garden accidentally and so glad we did. Unfortunately, by then it was late and this 70-acre garden wasn't something we could see in 30 minutes, which was how long we were there. We did capture a few good pictures though. I really liked taking pictures of the flowers, there were tons of variety. 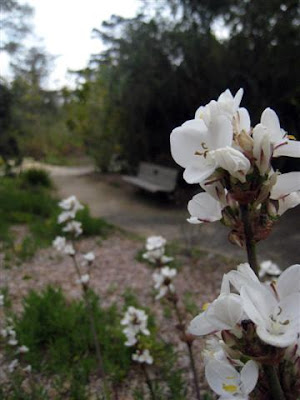 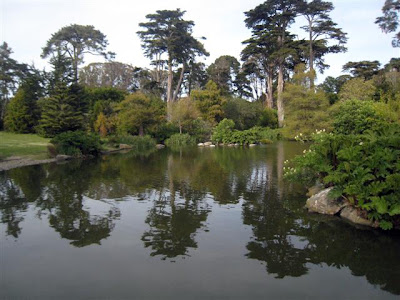 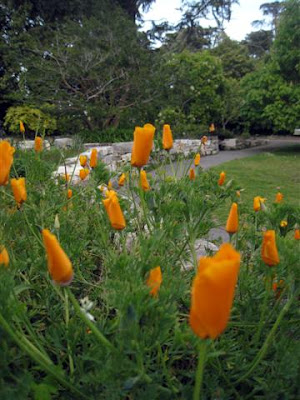 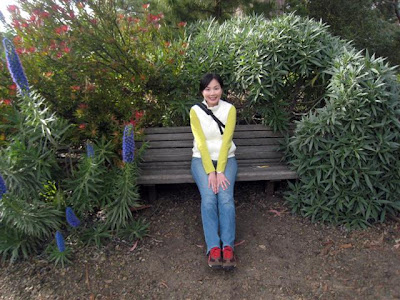 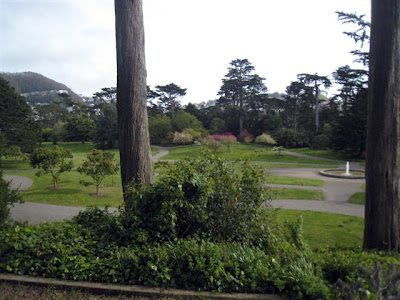 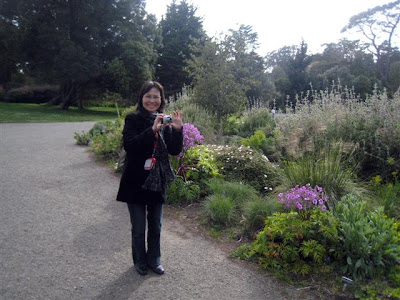 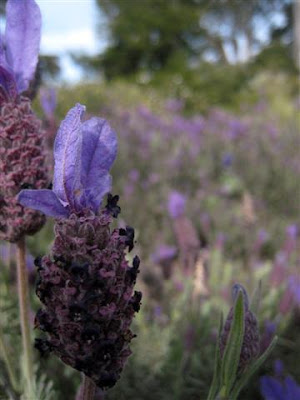 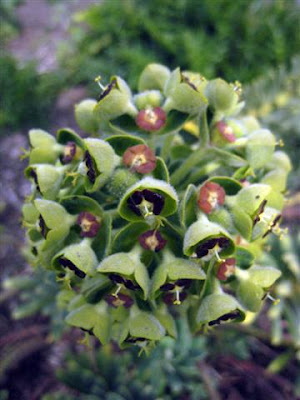 This is my favorite of all the flower shots. 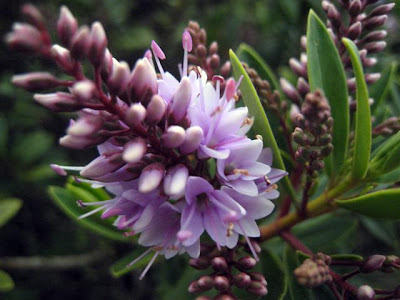 Best of all, there were benches like this one all around the garden. I really could've stayed here all day. 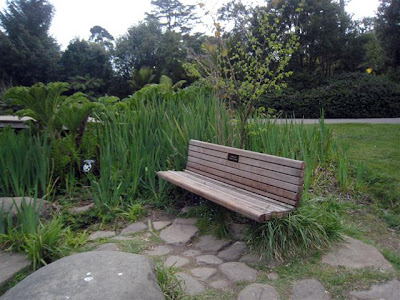 It was near 7pm when we started to leave. By the time I finally got back to the hotel at 7:30pm, I was BEAT. I was sore all over, not just my legs either. However, Luke and I still went out for dinner in Chinatown. :) We ordered fried pork shops, duck and taro clay pot, and seafood fried noodles. They were all very good, especially the noodles! I didn't even need the seafood toppings. The food healed me for another day. :)