Joyce commented the other day that I had not posted anything in a while. My reply was simple, almost all the stuff I want to post about would lead to long rants with lots of cursing about the world around us. For some background, my favorite economist these past few years is Nouriel Roubini and my idea of required readings are The Economist and Asia Times. Also, I've been criss-crossing the country lately and all of that has been grating on me as well. I do have somewhat of a respite this week, so I figured I'd throw a post up. So here are some short quips that have passed through my head:

-I've been waiting for the economy to go all to hell but I didn't expect the Fed to be so asinine as to keep dropping rates and killing the dollar along the way. This hit me square between the eyes a few weeks ago when I had to take my watch in for repairs. I had stripped the threads on the stem so I couldn't get the winding nub to seal. Well, the part that used to only cost $60 a few months ago was now gonna run me $120!! Thanks a lot Ben. I mean, cmon man, this is a not a liquidity problem, it's about solvency.

-Then there was this whole thing in Congress with Roger Clemens and his use of steroids. Who the hell cares? Isn't there more pressing issues in this country than some ballplayer using drugs? Sure, someone should probably be addressing this, but Congress? Last I checked, there was a war going on somewhere that the US started, right?

-And we have the motherload, the whole subprime bailout story. Part of which is the rebate check crap. I believe there are serious problems with this country, both in the short and long term, and not just on the financial front. Regardless, the thought of some stupid rebate check fixing things is beyond my comprehension. But what really lit my ass on fire was the fact that Joyce and I wouldn't get a penny of it. So basically, we've been working hard and saving our pennies to buy a place when the price is right, but because of those that did the complete opposite and bought stuff they couldn't afford, the wise Govvy decided to give the masses more cash (cash that the US Government doesn't even have) to throw around. The concept of negative and positive reinforcement is completely lost on the people in Washington. The stimulus package never should've passed, but since it did, it should've been a blanket across all segments of the population. 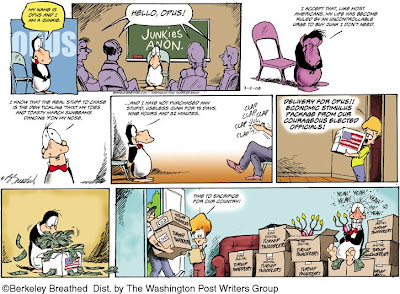 I could go on and on about each of these (I didn't even bring up Tibet and Darfur), but that last one segues into our little adventure last nite, TAXES. What an exercise in futility! Joyce and I spent hours dicking around with our taxes to whittle down the amount owed. We tried filing both separately and jointly and was able to knock a few grand off the final total, but we'll still have to fork out a big chunk of change. We've been using TaxSlayer for several years now and highly recommend it. You can use it for free and it holds your hand throughout the whole process, much like the other more expensive options like TurboTax or TaxCut. In the end, you are provided a 1040 form from which you can use to fill out your own hard copy to mail in. Or, you can opt to pay TaxSlayer $10 bucks to have it filed electronically. This may be our last year using this tool as we'll most likely seek out an accountant in the future. With no plans to buy into this insane housing market or desires to have any little Joyces and Lukes running around, we need someone to help keep the damn Govvy from robbing us blind. Then again, I hear most accountants are good at doing that as well...