The Power of FatWallet 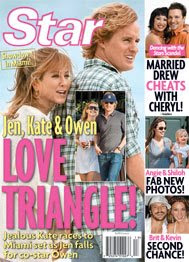 Hi, my name is Sugarlens and I am a Star-aholic.

Go ahead and tsk tsk me. I will embarrassingly admit that I have just started receiving this magazine in the mail. It's so nice to be in the loop on celebrity gossips again. I mean, when did Suri and Shiloh get to be so big? And what? Angelina is pregnant, with twins? Where have I been? I hope to redeem myself, though, by saying that I didn't pay for the subscription. That's right, I paid $0 for it. I got it for free.

So, my purpose for this post isn't to tell you what I just learned from the magazine (although I desperately want to know your thoughts on the love triangle between Jen, Kate & Owen). Instead, I want to share with you the awesomeness of FatWallet.

Luke and I both peruse FatWallet on a daily basis, although I think he does it a bit more frequently than me. Using FatWallet, we have found such sweet deals, often free stuff. We have received free photo prints, free sample size sundries, free food (including dog food for Pargo), free magazines (not just Star), free t-shirts, and the list goes on. While I would love to post such deals I find on {sugarlens}, I don't want to make my blog less personal. Therefore, if you love a good bargain or free stuff, I strongly encourage you to browse FatWallet every so often. It's really worth it!

Now, more importantly, is Brit and K-Fed back on for real?
Email Post
Labels: shop