Until We Meet Again 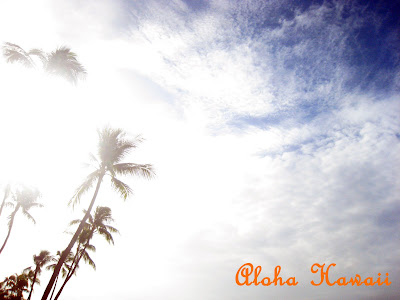 It was the morning of our very last day in Hawaii. We would later go to the airport and catch our flight back home. First though, there were few things left to do…

1. Eat the grapefruit/huge lemon from Kauai
It was incredibly horrendously sour! So Luke decided to squeeze out the juice and diluted it with water. It was still very unpleasant, but I took funny videos of him peeling, squeezing, mixing, and drinking. We often watch them and still laugh out loud. I won’t show the videos here, but here are some screen shots of the “bartender” at work.

2. Pack
Suitcases always seem heavier on return trips. It was no exception with us. We didn’t buy any large-item souvenirs and washed our clothes daily, but it just seemed we had a lot more stuff going home. We packed light and only had 1 large suitcase and a small duffel bag between the 2 of us. While at the airport later, the large suitcase was overweight that we had to do some shuffling. It didn’t make sense to me. We simply moved some stuff from the large suitcase to the duffel bag. The overall weight that the airplane would carry was still the same, but if we hadn’t done that, United was going to charge us extra for the overweight suitcase. What a scam!

Excuse me for the blurry image, it was captured from the video as well. 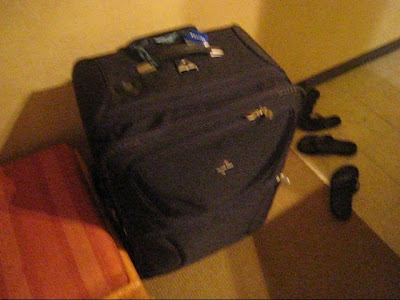 While at the complementary breakfast buffet that morning, we grabbed extra pastries for the road. We lived on these pastries during our week in Oahu. They were island-inspired so the flavors were a bit more interesting. Flavors such as papaya, banana, and taro. The crust was so flaky and light. It was like eating air. Air with 1000 calories.

Taking a little bit of Hawaii with us… 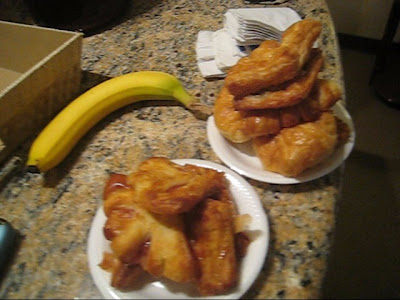 3. Walk to the beach for one. last. time.
What ya know? Even the sun came out to bid us farewell. Where were you the last 4 days when we needed you? For 2 hours, we sat on this very bench and watched the world go by. Okay, really, we were just people watching. It was a lot of fun, talking about the people around us and trying to figure out their stories. 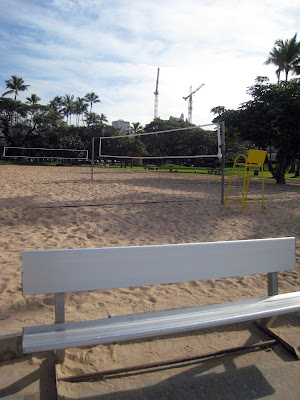 Here were some of the people we watched. I labeled each accordingly. The Hot Girls took turns posing and taking pictures of one another. I thought they were college students, but Luke said that they looked older. Regardless, they inspired me to get in shape. But now that I am back home, I am no longer inspired.

The Little Girl, The Mom, and The Baby were family. There was also a brother and father (not pictured). Actually we saw the family arriving at the beach, but the father took off somewhere and never came back. It was funny because The Mom and the kids just left their stuff at the side of the road and took off to the beach. No one was guarding them and they didn't care about things getting stolen. The Baby was so cute. She looked adorable in her arm floaters. 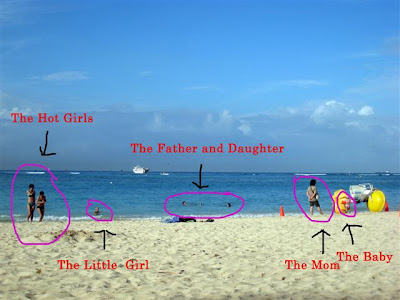 Here we were, observing... 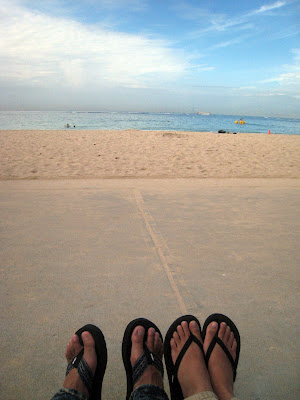 It was so much fun and the weather was so nice that we didn't leave until when we realized that we would miss the flight if we didn't.

4. Eat
We were patrons to this Chinese buffet a total of 3 times. Breakfast, lunch, and dinner - we tried them all. When we visit Oahu next time, we are coming back here! We will always remember the tourists (all guys) from Mainland and their man purses. 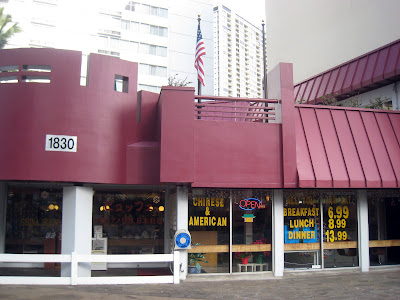 This was what I put in my tummy that morning. It was so good, especially the eggs. I wish I knew how to cook eggs EXACTLY like that. 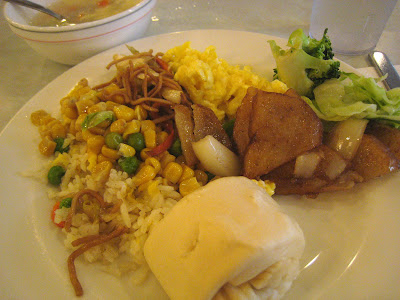 After breakfast, we slowly walked back to our hotel for the very last time. ::sobs:: We checked out around 12 noon and the front desk called a cab for us. When a limo pulled up instead, we were a bit confused. But it was indeed for us so we got to ride in a limo together for the very first time! What a wonderful way to end our honeymoon.

Hawaii, you had us at aloha.
Email Post
Labels: travel