Getting Close, Almost There

When it came to finding a reception venue, I was clueless. I really wanted a catered dim sum buffet right in the garden. It would have kept everything at one central location. But soon I realized that it was impossible because food and beverages were prohibited on the garden grounds, let alone pitching a tent or bringing in tables and chairs. Next.

Then I thought about having dim sum at a close by Chinese restaurant. Fortune Chinese Seafood Restaurant popped into mind because it was semi-close to the garden. So I called, but found out they closed the branch I had in mind. Moving on.

One day I went to McLean for a work meeting. My company is headquartered right across the street from Tysons Galleria, an upscale mall in the area. After the meeting was over, I moseyed on over to the mall to bargain hunt. While wandering, I saw Maggiano’s and remembered a family friend’s daughter had her wedding reception there a couple of years ago.

On a whim, I decided to go in and see what I could find. I got to talk to one of the banquet managers, Ali. She was so nice, and so eager to explain everything to me! We walked through all the banquet rooms and I received a detailed brochure that consisted of the menu options, price listings, room layouts, terms and conditions, etc. The banquet rooms were furnished with dark wood furniture, oversized mirrors, and pretty light fixtures. I thought: minimal decor required on my part. What really sold me was that the banquet rooms were *free* as long as we reached the food/beverage minimum. It was cheaper than I could ever imagine. Two weeks later, I brought Luke with me (this time with a real appointment) and he was sold as well. This was back in April.

Five months later, we had our luncheon reception at Maggiano’s. Ali was a dream to work with. Except for few minor glitches (I will get to that later), we were really happy with the service and attention received. **And to give myself some kudos, at one of our planning meetings, Ali mentioned that she enjoys working with brides such as me because we are super organized and decisive. :) What a sweet thing to hear in the midst of wedding planning!

So anyway, following where I left off, after a short drive from the garden to Maggiano’s in Luke’s Scion (yes, we drove ourselves, no limo for us!), we met Heather for a few shots before joining our guests at the reception.

Posing right in front of the entrance. I love it that Corner Bakery Cafe was also in the picture! 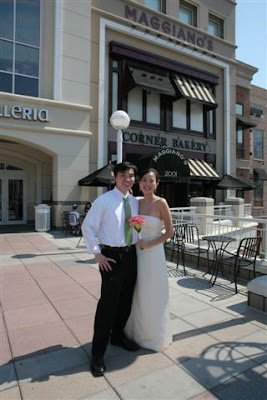 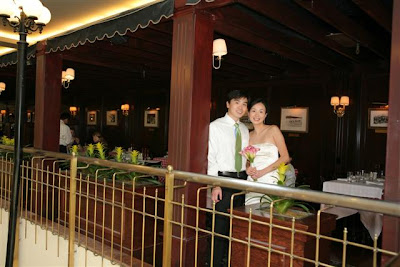 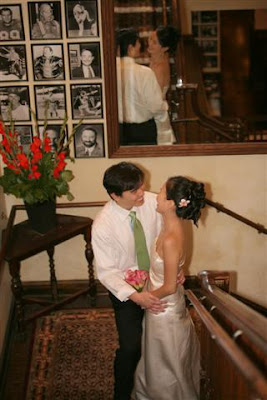 One last kiss before heading upstairs to the banquet rooms. Now it was really time to eat! 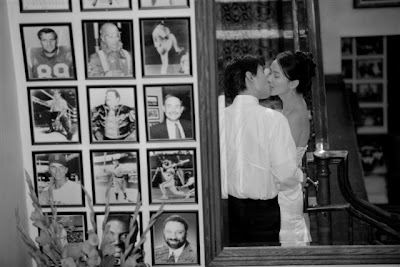